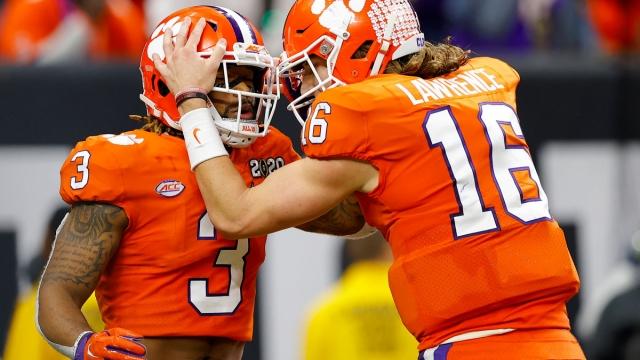 
Welcome to a busy schedule in Week 2 of the 2020 college football season. After nine games last week, a bunch of more teams join the fun. Most ACC and Big 12 teams begin their seasons this week. It’s also the first week featuring ranked teams — six Top 25 teams are in action.

Here’s what you need to know for Week 2:

D’Eriq King will lead the Hurricanes in their 2020 debut after transferring from Houston. Meanwhile, UAB was one of a handful of FBS teams to play in Week 1, when the Blazers totaled 459 yards in a 45-35 win against FCS Central Arkansas.

The UAB defense will try to slow down the dangerous King, who accounted for 50 touchdowns in 2018. The Blazers have used top-10 defenses in each of the last two years to help the program go a combined 20-8. That run includes consecutive C-USA Championship Game appearances (winning in 2018). UAB’s offense is led by RB Spencer Brown, the program’s all-time leading rusher.

After going 7-6 with a huge freshman season from QB Sam Howell, UNC comes into 2020 with high expectations and a preseason ranking. The Tar Heels scored 56, 41 and 55 points in their last three games to close out 2019, crushing Mercer, NC State and finally Temple in the bowl game.

But how will coach Mack Brown’s group do with even more attention? Howell passed for 3,641 yards and 38 scores a season ago and gets to work with WR Dazz Newsome and RB Michael Carter. UNC will have little trouble outscoring some foes this year. But now the pressure is on.

This could end up being the best game of the weekend.

Iowa State enters with a preseason ranking and QB Brock Purdy, but Louisiana seems primed to follow fellow SBC member Appalachian State (ranked much of 2019) in the Top 25 sooner rather than later.

Billy Napier led the Ragin’ Cajuns to 11 wins in 2019 and lost by only a touchdown to Appalachian State in the SBC title game. Louisiana brings back its top stars this season, too: QB Levi Lewis (3,050 passing yards) and RBs Elijah Mitchell and Trey Ragas (nearly 2,000 combined rushing yards).

Iowa State started 2019 with a national ranking and escaped FCS Northern Iowa in OT. This could be another close one. It’s a huge test as the Cyclones hope this is the beginning of a breakout season.

It’s a history-making day for Notre Dame. After more than 900 wins, double-digit national titles and seven Heisman Trophy winners, the Irish are doing something this weekend they have never done before: play in a conference game.

For the 2020 season, Notre Dame is a member of the ACC. It’ll get to open up at home against Duke in a season it hopes includes a trip to the ACC title game. QB Ian Book should be ready for a strong senior season after throwing for 34 touchdowns in 2019.

The Irish are expected to be Clemson’s biggest threat in the ACC.

This is the teams’ first meeting since 2015, when the Jackets shocked then-undefeated Florida State by blocking a 56-yard field goal and returning it for a score on the last play of the game.

A lot has changed since then.

Mike Norvell comes to Florida State following a 12-1 regular season at Memphis. And Georgia Tech is hoping to get better after Geoff Collins’ 3-9 debut.

Norvell is the Seminoles’ third coach in four years, but returning starting QB James Blackman is back.

You have to include the preseason No. 1 team in its first game, right? But there’s also College GameDay history, as the popular pregame show will come to Winston-Salem for the first time. Wake Forest’s home city will be the 90th to serve as host.

As for the game, Clemson has the top ranking, has won the last 11 in the series — and has returning offensive stars QB Trevor Lawrence and RB Travis Etienne. Both are obvious Heisman contenders and should have big numbers in their first game of the season.

How will this weekend matter for the next AP Poll?

The next AP Poll, the first since the preseason, is scheduled to be released Sunday afternoon. However, only teams that are scheduled to play games this fall season can be ranked going forward. That means nine teams will drop out — and thus nine new teams are guaranteed to move into the poll no matter what happens this weekend.

These Big Ten and Pac-12 teams will be out of the poll because they are not scheduled to play games:

That means a lot of new teams will be ranked next week. BYU looked impressive in a 55-3 rout of Navy in Week 1, but more will have a chance to use this week’s stage as a prove-it moment. Miami vs. UAB, Army vs. UL Monroe and Louisville vs. Western Kentucky are just three games involving unranked teams where a big showing could lead to some gigantic vote shifts on Sunday.

Should we expect plenty of surprises this fall?

There definitely seems to be the right kind of atmosphere for strange results each week because of COVID-19 reasons. Players may be required to sit because of positive tests (or could be in quarantine if a teammate tests positive), we’re dealing with games getting rescheduled or postponed, practice schedules may look different from team to team and player to player — and the pandemic itself means people will be trying to stay safe.

With so much going on, there could be some surprising results.

In Week 1, not many could have seen BYU beat Navy 55-3 on Monday, nor could many have expected SMU to struggle at Texas State, either.

While that doesn’t mean we’ll (probably) see Wake Forest shock No. 1 Clemson this Saturday, there could be some eyebrow-raising upsets along the road to the College Football Playoff. There usually are some every year, but this season could provide more.

For Week 2, that could mean some surprisingly close games such as Louisville vs. C-USA contender Western Kentucky, Kansas State vs. Arkansas State (the Red Wolves have already played game) and Miami against UAB.

*No scheduled games for this fall