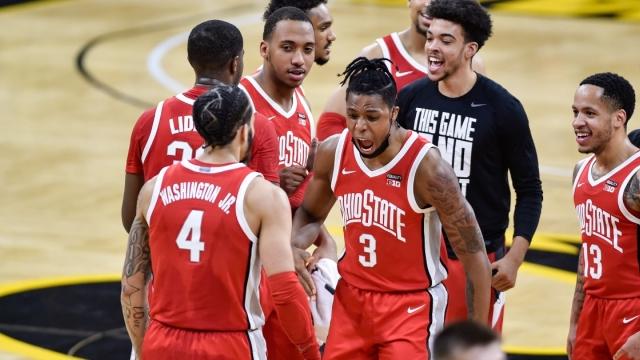 The Big Ten could join this exclusive club if two of its teams earn No. 1 seeds

In Andy Katz’s latest NCAA tournament bracket projections (which reflect games played through Feb. 7), Ohio State joined Gonzaga, Baylor and Michigan on the No. 1 seed line, which means the Big Ten could earn two of the top four overall seeds.

Such an accomplishment by one conference is certainly not uncommon, but recent NCAA tournament fields might skew just how difficult it can be for a conference to claim at least two No. 1 seeds in the same season.

Here’s the elite group that the 2021 edition of the Big Ten could join if two of its schools earn a No. 1 seed on Selection Sunday.

Conferences with 3 No. 1 seeds in the NCAA tournament

In the most recent NCAA tournament, the ACC pulled off something that only the previous iteration of the Big East had accomplished: earning three No. 1 seeds. Duke was the No. 1 overall seed and got swept in the regular season by North Carolina, which also earned a No. 1 seed, as did eventual national champion Virginia, whose only regular-season losses came against Duke.

Conferences with two No. 1 seeds in the NCAA tournament

Xavier won the Big East regular-season title in 2018 and earned a No. 1 seed for the first time in program history, but it was overshadowed by Villanova, which also earned a No. 1 seed and won its second national championship in three seasons. Meanwhile, Xavier was upset in the second round by No. 9 seed Florida State, which Xavier had upset in the previous NCAA tournament when the Musketeers were a No. 11 seed and the Seminoles were a No. 3 seed.

This was the first time since the Big East’s membership restructuring that the conference earned two No. 1 seeds.

Remarkably, both North Carolina and Virginia faced another ACC opponent in their respective Elite Eight matchups in 2016, with the Tar Heels blitzing No. 6 seed Notre Dame and the Cavaliers falling to upset-minded No. 10 seed Syracuse. Virginia defeated North Carolina in its only regular-season meeting by five points, then the Tar Heels beat the ‘Hoos in the ACC tournament by four points.

North Carolina and Virginia ended a six-year drought of NCAA tournaments in which the four No. 1 seeds played in four different conferences.

Villanova represented the best-seeded opponent for 2006 national champion Florida, which had previously beaten No. 14 seed South Alabama, No. 11 seed Milwaukee and No. 7 seed Georgetown, before beating No. 11 seed George Mason and No. 2 UCLA in its final two tournament games. Meanwhile, UConn fell to that George Mason squad 86-84 in overtime, which was the Huskies’s second overtime game in a row after they needed five extra minutes to defeat No. 5 seed Washington in the Sweet 16.

The 2005 NCAA Tournament marked the second time since the NCAA tournament’s expansion to 64 teams that the two Tobacco Road rivals earned a No. 1 seed in the same season. While North Carolina won the national championship – its first since 1993 – Duke lost in the Sweet 16 to No. 5 seed Michigan State, which later met North Carolina in the Final Four. The Tar Heels beat the Spartans by 16.

Still to this day, Duke and North Carolina have never met in the NCAA tournament.

Despite Kansas earning a No. 1 seed on 11 occasions since the Big Eight was renamed the Big 12, the conference has only had one season in which two of its schools earned a No. 1 seed in the same season and ironically, that was in 2003, when neither of those schools was named Kansas. Instead, Oklahoma and Texas earned a spot on the top-seed line, with Kansas earning a No. 2 seed and advancing to the national championship game.

The same team dispatched Oklahoma and Texas from the 2003 NCAA Tournament. Can you name it?

Hint: it was the same team that beat another Big 12 foe, Kansas, in the national championship game. It was Syracuse.

This was the final year in a four-season stretch in which two No. 1 seeds hailed from the same conference.

In the history of kenpom.com’s database, which dates back to the 2001-02 season, just one school has finished a season ranked No. 1 in both offensive efficiency and defensive efficiency. That was Duke in 2002, which had a roster featuring Jay Williams, Carlos Boozer, Mike Dunleavy Jr., Dahntay Jones and Chris Duhon.

A year after Michigan State won the national championship under coach Tom Izzo, the Spartans earned a No. 1 seed in the next season’s NCAA tournament and made it back to the Final Four as they attempted to win back-to-back national championships. But they fell 80-61 to Arizona, one round after Arizona knocked off Illinois 87-81.

The Wildcats lost to Duke in the national championship game.

The first year of the new millennium was the only time that the Pac-10, now the Pac-12, has earned two No. 1 seeds in the same men’s NCAA tournament. That year, three of the four No. 1 seeds lost before the Elite Eight, including Arizona and Stanford both falling in the second round to No. 8 seeds. Wisconsin toppled Arizona and North Carolina knocked off Stanford, and both No. 8 seeds advanced to the Final Four.

Duke finished atop the ACC standings by two games in 1998. The Blue Devils went 15-1 in conference play, two games better than North Carolina, which won the ACC tournament. In the regular season, North Carolina won the first meeting in Chapel Hill by 26, then Duke won in the regular-season finale by two points.

Michigan was ranked No. 1 in the preseason before the 1992-93 season. But Indiana won the Big Ten regular-season title by going 17-1 in the conference, two games better than second-place Michigan. The Hoosiers swept the Wolverines in the regular season, beating them by one point in both Ann Arbor and Bloomington. That was the difference in Indiana winning the Big Ten and there being a shared conference championship, or even one won outright by Michigan.

But it was the Wolverines that advanced further in the NCAA tournament, making it to the national championship game, where they lost to North Carolina. Michigan’s NCAA tournament participation was later vacated.

In the first-ever 64-team NCAA tournament, two teams from the same conference earned No. 1 seeds and met in the Final Four: Georgetown and St. John’s. But it was another Big East team, No. 8 seed Villanova, that won the NCAA tournament after the Wildcats’ unlikely tournament run was capped off with a 66-64 win over Patrick Ewing and mighty Georgetown.