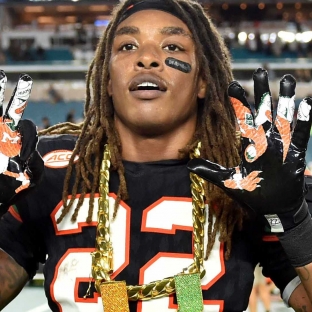 Just three weeks of college football’s regular season remain, followed by conference championship games in the first week of December. There are still handful of games each week with major implications on the College Football Playoff.

RELATED: College football teams (we think) control their own destiny for the playoff

If you’re a college football junkie who wants to know who will make the College Football Playoff, keep an eye on the following games.

Stanford vs. No. 9 Washington

Washington was the only Pac-12 team ranked in the top 15 of the initial College Football Playoff rankings. The Huskies are the only one-loss team left in the conference and they represent the Pac-12’s best hope of making the Playoff.

Watch: Highlights from tonight’s 38-3 victory over Oregon at the #GreatestSetting.#PurpleReign pic.twitter.com/GQVl7bdQ6l

Washington’s final road game is in Week 11, when it travels to Stanford, which is one loss behind Washington in the Pac-12 North standings, along with Washington State. Every other Power Five conference entered last weekend with at least two teams ranked ahead of Washington, so another loss for the Huskies could sink their Playoff chances, and therefore the Pac-12’s chances of being represented in the four-team field.

OK, bear with us on this one. Ohio State and Michigan State weren’t in the committee’s top four, nor were they among the next four teams, when the latest edition of the College Football Playoff rankings were released Tuesday night. The Buckeyes and Spartans are tied atop the Big Ten East standings, meaning the winner of this game will be in the driver’s seat for making the Big Ten Championship.

This game is relevant because A.) It could very easily determine who Wisconsin will play in the conference title game, and the Badgers are the Big Ten’s best hope of making the CFP, and B.) If college football really goes off the rails and multiple two-loss teams win Power Five conferences, including the winner of the Big Ten East winning the Big Ten, Ohio State or Michigan State could sneak into the hunt.

Top-ranked Georgia has proven its ability to win on the road this season with a narrow victory at Notre Dame in Week 2 and a pair of blowout wins on the road in the SEC. Now the Bulldogs have to go to Auburn and leave with a win in order to keep their perfect record intact. The Tigers have won their last nine home games, including three against ranked opponents, and they lost by just six points at Georgia last season.

It’s never been just about a dream, it’s about the work we do to keep the dream alive. #ATD pic.twitter.com/szMlC76RsC

Georgia has clinched the SEC East but an Auburn win would keep both the Tigers’ SEC Championship (and College Football Playoff) hopes alive, while also decreasing the likelihood of the conference sending two teams to the Playoff.

College GameDay elected to return to Coral Gables, Florida, for the first time in 16 years, and for good reason. No. 7 Miami, currently undefeated and in the driver’s seat of the ACC Coastal division, hosts No. 3 Notre Dame, which debuted in the top four of the College Football Playoff selection committee’s top 25 rankings.

“Send a statement to everybody in the country.”

Each team represents the chance for the opposition to earn its biggest win of the season. While it’s still too early in the season (and there are far too many potential outcomes in meaningful games across the country) to declare the loser of this game out of the playoff hunt, we could very easily look back at this game on selection day and see how Saturday night’s result impacted which four teams made the Playoff.

Last week there were four teams tied atop the Big 12 standings. This week? There are just two: Oklahoma and TCU. The Sooners and Horned Frogs will square off in Norman for a high-stakes game where the winner will position itself as the conference’s best hope of making the CFP.

A reminder: The Big 12 Championship returns this season, featuring the two Big 12 teams with the best record in conference play. This could potentially be the first of two meetings between Oklahoma and TCU, if they were to both advance to the conference title game. Oklahoma State, Iowa State and West Virginia enter the weekend one game behind the Sooners and Horned Frogs in the standings, so the loser will have a tougher road to both the Big 12 Championship and College Football Playoff.

Remember what happened the last time Auburn hosted an undefeated Alabama team? In case you forgot, maybe this will jog your memory.

That was in 2013, when No. 1 Alabama traveled to Auburn and lost on a missed field goal that was returned the length of the field for a touchdown as time expired. The Tigers have lost by double digits to the Crimson Tide in their last three meetings, but if Auburn can end its losing streak in the Iron Bowl, it would have major playoff ramifications, especially if Auburn also beats Georgia.

Stanford vs. No. 3 Notre Dame

The first phrase of the College Football Playoff’s proposed selection process reads: “Establish a committee that will be instructed to place an emphasis on winning conference championships…” Due to its independent status, Notre Dame doesn’t have the benefit of playing in a conference championship game so the Fighting Irish’s road game against Stanford on Nov. 25 will be the committee’s last chance to see them play before the final rankings are announced.

After falling to 6-3 with a loss at Washington State in Week 10, Stanford isn’t ranked in the latest edition of the College Football Playoff rankings, but a road win for Notre Dame against the Cardinal would still be a meaningful result.

It goes without saying that every conference championship game is incredibly important, each with tremendous potential impact on the College Football Playoff. But this year’s SEC Championship is on a higher plane, even by conference championship game standards, because of the possibility of No. 1 Georgia and No. 2 Alabama meeting as undefeated teams. If neither has suffered a loss up to that point, the winner is guaranteed a spot in the Playoff and likely the No. 1 ranking. If the game is close, there’s a chance both teams could make it from the same conference, an unprecedented event in the albeit brief history of the CFP.

Georgia clinched the SEC East last weekend and Alabama can clinch the SEC West with either an Auburn loss against Georgia or a win against the Tigers in Week 13. If Auburn ends up representing the SEC West in the conference title game, that means the Tigers will have beaten both Georgia and Alabama, making them serious Playoff contenders if they were to defeat the Bulldogs a second time.