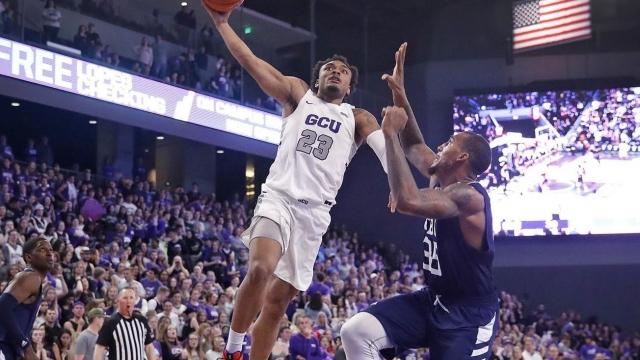 The 45 teams that have never made the NCAA tournament

In the long history of the NCAA tournament, a field that has now grown to 68 teams, there are still many programs waiting to participate in their first March Madness.

It’s important to remember that the NCAA tournament’s format has changed drastically throughout the years. The first tournament in 1939 had only eight teams and didn’t expand to 16 until 1951. The modern 64-team format didn’t appear until 1985, and it wasn’t until 2011 that the field expanded to the full 68 teams (including the First Four) that we’re familiar with now.

California Baptist and North Alabama will be eligible for the NCAA tournament beginning with the 2022-23 season.

Bellarmine, Dixie State, Tarleton State and UC San Diego all moved to Division I this season. They will be eligible for the NCAA tournament beginning with the 2024-25 season.

MARCH MADNESS: Complete schedule and dates for the 2021 NCAA tournament

The tournament has grown from an initial eight teams, moving to 16 in 1951 and then growing steadily until 1985, when it reached its familiar format of 64.

Play-in games have made appearances throughout the years, but became a permanent fixture in 2001, when the total number of teams was bumped to 65. In 2011, the play-in was expanded to create the First Four, an opening round that helped fill out the Round of 64. Thus, since 2011, 68 teams have made the NCAA tournament every year.

Two teams have made the NCAA tournament but haven’t been part of the bracket as most of us know it. Houston Baptist made the preliminary round in 1984, when there were 53 teams in the tournament, but lost to Alcorn State. Alabama A&M won the SWAC in 2005, earning the school’s lone automatic bid, but fell to Oakland 79-69 in the tournament’s play-in game.

There is another small group included in this list — the four teams that have been eligible for every NCAA tournament but have failed to make it to one.

In 2017, Northwestern gained plenty of attention as the Wildcats — previously one of the five original teams to never make the tournament — not only qualified for their first ever tournament, but actually picked up a win, and gave eventual runner-up Gonzaga a run for its money in the Round of 32.

GET READY: Download and print the official 2021 NCAA tournament bracket

The four teams to have been eligible for every tournament and not been dancing once are Army, St. Francis (NY), William & Mary and The Citadel.

Scroll to view the table in full

You’ll find no Power 5 teams among the uninvited. For the most part, these aren’t teams that you will typically find themselves ranked in the AP Top 25 .