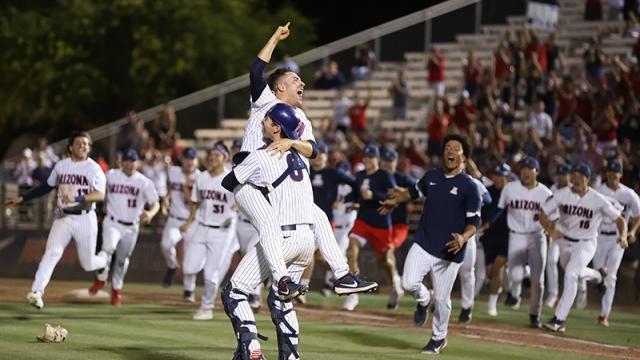 The 2021 College World Series: By the numbers

Come Saturday, the operative number in Omaha will be 723. That’s how many days since the last College World Series game.

The pandemic is not gone and neither are some of the restrictions, but the magic of late June is returning to the banks of the Missouri River, and here are some of the numbers that go with it:

29: Schools that have won the College World Series. Five — Texas, Stanford, Virginia, Arizona and Vanderbilt — will play in Omaha this weekend. Vanderbilt, Arizona and Virginia have accounted for four of the eight most recent titles.

6: Schools that have repeated as College World Series champions, South Carolina the most recent in 2011. You’re on the clock, Vanderbilt.

27: Consecutive innings of Stanford games that have ended with the Cardinal in the lead. Stanford led wire-to-wire in the regional championship against UC Irvine and both super regional games at Texas Tech, and has outscored its NCAA tournament opponents 23-3 in the first two innings.

16: Home runs by Tennessee so far in five NCAA tournament games. The Vols have 98 for the season.

1-8: NC State’s start in ACC play. About then, the Wolfpack weren’t looking much like a team that would knock No. 1 Arkansas out of the tournament.

37: College World Series appearances by Texas, counting 2021. That’s first place by a couple of laps. The next best is Miami (FL) at 25. The Longhorns have stormed into their latest one by outscoring five NCAA tournament opponents 49-12.

BATTER UP: The 2021 Men’s College World Series preview and schedule for Omaha

2, 4, 5: Arizona’s relentless offense is second in the nation in on-base percentage, fourth in batting average and fifth in scoring. But 64th in home runs.

6-0: Virginia’s record in elimination games in the NCAA tournament. This, after the Cavaliers lost their openers of both the regional and super regional, so they’ve spent June with their backs against the wall.

2017: The last College World Series without Mississippi State. The Bulldogs have made it to Omaha three tournaments in a row, the longest streak of any of the eight teams.

3.84: Hits per nine innings allowed by Vanderbilt’s Jack Leiter, second best in the nation. Fellow Commodore ace Kumar Rocker is seventh in the country at 5.01.

7: Stanford grand slams this season. The Cardinal has gone homerless in only 14 of 53 games.

603-162: The strikeout-walk margin this season for Tennessee’s pitchers. That 3.72 ratio is second best in Division I.

21-2: Score of NC State’s opening loss to Arkansas in the super regional. The Wolfpack won the last two games 6-5 and 3-2, so they survived a super regional in which they were outscored 28-11.

49: Double plays turned by the Texas defense this season. That’s two more than the Longhorns have errors.

47: Consecutive games Arizona’s Donta Williams has reached base. The last time he failed to get on base was March 13.

14: Runs that Virginia coach and Omaha native Brian O’Connor gave up in a game when he was pitching for Creighton in the early 1990s. That’s still a Bluejays’ school record. O’Connor was 20-13 in four years as a Creighton pitcher. He is also only one of two men to make College World Series appearances as a player (Creighton), assistant coach (Notre Dame) and head coach (Virginia). Cal State Fullerton’s George Horton was the other.

WELCOME TO OMAHA: Live coverage of the 2021 College World Series

8-3: Mississippi State’s season-opening win over Texas. That was four months ago. Sunday night, the two will meet again.

5.1: Average number of balls thrown per inning by the Vanderbilt pitchers in their two-game super regional sweep of East Carolina. They allowed five hits and one run in 18 innings.

2: Triples hit against Tennessee all season.

3: Hits by NC State’s Jose Torres in the super regional against Arkansas. All three were homers, including the ninth-inning series-winner in Game 3.

31: Bunt singles this season by Texas. That includes 15 by Eric Kennedy, who has 26 infield hits.

170: Consecutive games in which Arizona has scored at least one run. The Wildcats have not been shutout since March 17 of 2017.

24: Strikeouts by Virginia pitchers against Old Dominion in an 8-3 victory in the regional, the third most ever in a Division I nine-inning game. That included 16 K’s by reliever Brandon Neeck, who faced 24 batters.

48: Games this season, out of 61, that Mississippi State pitchers have struck out at last 10 opposing hitters.

157-67: Vanderbilt’s scoring edge in the fourth, fifth and sixth innings this season.

13: Saves this season for Stanford closer Zach Grech. Two other Grech numbers to know are 3.66 and 4.01. No, those aren’t earned run averages, they’re his undergraduate and post-graduate grade point averages.

16: North Carolina State victories that have the fingerprints of reliever Evan Justice. He has 11 saves and five wins.

1.84: Earned run average for Texas’ Pete Hansen, the lowest of any starter in Omaha. He has given up two home runs in 83.1 innings, and is a major reason the Longhorns’ staff leads the nation with a 2.89 ERA.

0: NCAA tournament game experience by the entire Virginia team before this May.

306: Career hits by Mississippi State graduate student second baseman Scotty Dubrule, the most in Division I. So are his 257 games played.

311: Combined strikeouts by Leiter and Rocker for Vanderbilt. They are 1-2 in the nation in most Ks.

6-1: Stanford’s record in extra-inning games. The Cardinal has outscored its opponents 32-11 in the ninth inning or later.

No. 2: Tennessee’s rating in some polls, the highest in the history of the program.

20-4: Combined margin of defeat for Texas when the Longhorns started the season 0-3 in the State Farm College Baseball Showdown, losing to Mississippi State, Arkansas and Mississippi. Things got a little better after that, winning 17 of their next 20.

1992: The last time Arizona won an outright conference title, until this season.

5: Virginia trips to Omaha, all of them in the past 12 years. That includes the 2015 national champions. This week, Ernie Clement became the ninth member of that team to play in the major leagues.

40,140: Combined attendance at the three super regional games at Mississippi State. College baseball is back in June, alive and well. We’re about to see that in Omaha.