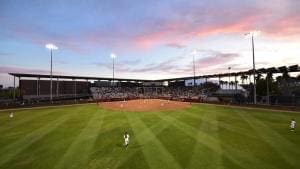 The 15 best places to watch college softball, according to the fans

We heard from people all across the country who eagerly weighed in with their favorites.

We read all of your responses and present below, in no particular order, the 15 best places to watch NCAA softball, according to the fans:

Tiger Park is located off the banks of the Mississippi River. According to LSU, the park features 1,289 chair-back and bench-back seats, a party deck on the third-base side and a 30-seat suite above the first-base line. There also is seating for 960 additional fans in the newly designed Tiger Park Terrace.

Rhoads Stadium was built in 2000 and has a capacity of about 4,000. Alabama has set multiple NCAA attendance records over the years.

I will just leave this here and let you off the hook for asking this pic.twitter.com/veD1RlWFtU

Rhoads and its proven. Attendance, winning percentage there always amongst the best if not highest.

Bogle Park holds 1,200 and even has a space for BBQ grilling in the outfield area. Yum!

BOGLE BY A MILLION @RazorbackSB

According to Arizona, over the last seven seasons the Wildcats have averaged more than 2,000 fans per game. In 2012, the stadium’s all-time attendance reached 700,000 fans.

no place in the country shines brighter than Rita! @ArizonaSoftball

Husky Softball Stadium overlooks Lake Washington with a view of Mt. Rainer. The stadium was built in 1994 and renovated in 2014. It holds about 1,500.

Washington Huskies (have you seen the bald eagle 🦅 perched atop the beautiful 🌲 and not to mention it’s adjacent to Lake Washington with a view toward majestic Mt. Rainier)

CHAMPS: Here are the 6 college softball teams with the most national championship

Jane Sage Cowles stadium at the University of Minnesota!!!

Katie Seashole Pressly Stadium was built in 1996 and had a major renovation in 2018. It has a total capacity of 2,691. Fans are able to watch play from anywhere around the ballpark due to the 360-degree concourse that wraps around the field.

The all-time Lamson Park attendance record came on May 20, 2012, in the Lafayette Regional Championship game vs. Stanford with 2,729 fans.

Alumni Field was builtin in 1982 and has a capacity of 2,650. There have been many renovations and additions to Alumni Field over the years, including an indoor hitting facility and press box.

Easton Stadium was the training facility for the U.S. National Softball Team for the 1996 Summer Olympics.

Others might have fancier digs, but these are hallowed grounds. This is The Home of Legends. @UCLASoftball pic.twitter.com/BZh50zlWHU

I mean, does anything even come close to the Jane??? @OregonSB

@ASUSoftball is the BEST home field!

John Cropp Stadium opened in 2013 and that same year hosted the SEC tournament. The stadium has 1,500 seats.