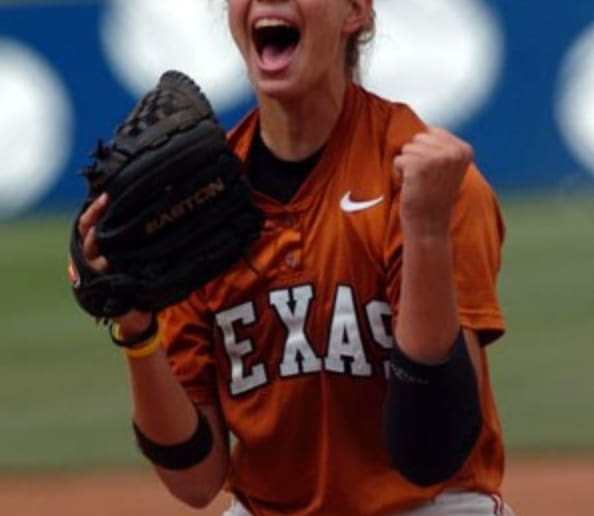 
Have you ever heard that pitching is the art of instilling fear? Or how about “softball is a game of inches”? It certainly is, and pitching is certainly an art. We decided to take a look at a few that mastered it over the years.

It’s a difficult task. I included players on this last based on career statistics, national championships and postseason performance, awards won, and then, of course, their level of pure domination. Here, in no particular order, are the college softball pitchers who did it the best.

The best college softball pitchers of all time

Cat Osterman is absolutely one of the best pitchers of all time. End of statement. Osterman left an unbelievable legacy on Texas softball and she is still leaving her mark as a pitcher now for the U.S. softball team. Osterman is a three-time National Player of the Year and back-to-back Honda Award winner for the best player in college softball. Osterman tallied 2,265 strikeouts in her career, and still holds the record for the best strikeout ratio record in the NCAA. On top of that, Osterman had the most perfect games in her career with nine. Next up is Monica Abbott, another pitcher on this list that I suspect won’t be arguable. Abbott is the NCAA strikeout king with 2,440 strikeouts. She also still holds the record for most strikeouts in a single season with 724. With that, Abbott took home 2007 National Player of the Year and the Honda Award. If you still need more, she also has the most victories and shutouts in the NCAA and certainly goes down as one the best pitchers of all time.

WATCH: Monica Abbott rewatches one of her 2007 WCWS games — and her reactions are golden There are a lot of nearly-immaculate pitchers on this list, but not one did what Jennie Finch accomplished in 2001. Finch went 32-0 that year and won the national championship. “A perfect ending to a perfect season,” Finch said following the title game. Finch is probably the most well-known softball player in the history of the game, and rightfully so. She too dominated her time, winning the 2001 and 2002 back-to-back Honda awards and setting the record for winning percentage and most consecutive wins in 2001. Another Arizona pitcher makes the list. Evans, like Finch, also did something no one else on this list accomplished as a collegiate athlete, and that is winning three national championships. Here 124-8 career pitching record is still No.1 in NCAA softball history, and that sealed the deal for me. But on top of that she finished with a .98 ERA and won the Honda Award in 1998. Don’t worry, these pitchers are listed in no particular order, and we would never forget Lisa Fernandez. We are talking about an absolute legend, who won the Honda award not once and not twice, but all four years she played at UCLA. That is pure domination. Fernandez took home two titles for the Bruins and finished with a .22 career ERA. On top of those four Honda Awards, she also won the Honda Broderick cup, for not just the best softball player in the country, but best female collegiate athlete. So yes, Lisa Fernandez is on this list. Next up on the list is Michele Granger. Granger might not have taken home those Honda awards, but she still proved herself to be one of the best. Granger still owns the NCAA record for most career no-hitters ever, with 25 no-nos. When you look at names like Fernandez and Granger, you do have to take into account that it was a different time period. But, she still dominated during this time. She broke the strikeout record at the time with 1,640  during her career and finished with a .46 ERA. Danielle Lawrie is certainly one of the best NCAA softball pitchers, and her career at Washington shows it. Lawrie struck out 1860 batters, including 521 in 2009 on her way to Washington’s first-ever national title. Lawrie also won USA Softball Player of the Year back-to-back and the Honda award twice in 2009 and 2010. Courtney Blades from Southern Mississippi also makes this list. Blades might not have been on a team that won national championships, but she still proved to be one of the top pitchers, taking home the Honda Award in 2000. In 2000, she broke Granger’s previous NCAA Division I career strikeout record and led Southern Miss to the WCWS. She finished the season with a total of 663 strikeouts that brought her career total to 1,773, a record that stood until 2006. Blades still holds the NCAA record for most wins in a season with 52. Let’s look at Keilani Ricketts next, as this Oklahoma ace takes a spot on the list. Ricketts not only took home a title for the Sooners, but she too won back-to-back National player of the year honors and back-to-back Honda Awards. And let’s just put the cherry on top, she won the Honda Broderick cup for best collegiate athlete in 2013. Out of all the legendary pitchers on this list, not many did that. Rachel Garcia’s name must be mentioned here when we are talking best pitchers in the NCAA. Her collegiate career is not quite over yet, but her Honda Broderick Cup in 2019 gives her the nod. Garcia gains some of her clout from her ability in the batters box as well, but she is the ace for the reigning national champions and has been dominating the game of softball in recent years. Garcia took home back-to-back Honda Awards and is the third player on this list with the Broderick Cup. And we only have more to come from the UCLA great. Here is yet another Arizona pitcher, Alicia Hollowell. The Wildcats already have two other pitchers on this list and a few more that were in consideration. Taryne Mowatt is one of those, who accomplished some unbelievable things at the WCWS for the Wildcats. Hollowell, though, won a national title with the Wildcats in 2006, finished with a .87 ERA in a more modern era, and racked up 1768 strikeouts. She leads all Arizona pitchers, including the two other names already on this list, in career wins, strikeouts, shutouts, innings pitched and strikeout ratio. How can she not go down as one of the best?

Have a college pitcher you think should make this list? Email us here.