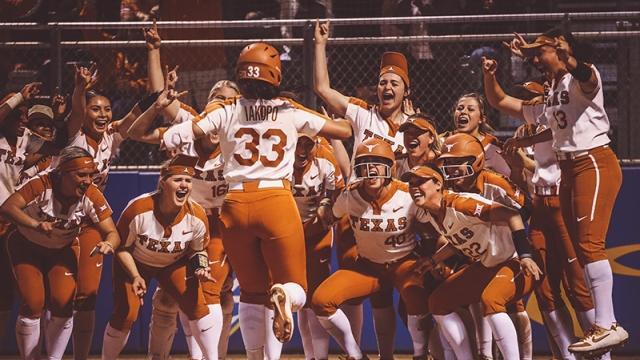 Texas softball hopes for even bigger 2021 season despite fall injuries

The following article first appeared on D1Softball.com. For more like it, you can use coupon code NCAA2021 to get a 20% discount for an annual subscription to DIBaseball.com or D1Softball.com.

He anticipated a few bumps along the way as the Longhorns got to know his coaching style while integrating four transfers from Oregon.

“It was difficult to be honest, especially when we had four starters coming in. Of course, that means you are taking someone else’s job,” White said. “I think we are well past that now and it definitely showed last year. We had the ‘One Team, One Texas’ culture. There is no more divide, and I think our culture right now is getting stronger.”

Texas finished the coronavirus-shortened 2020 season 24-3, and among the top three teams in most major polls. The Longhorns went 5-1 against ranked teams, including wins over UCLA and Washington.

Three seniors returned for an extra year of eligibility this season, and three seniors decided to move on (Kaitlyn Slack, Reagan Hathaway and Tuesday DerMargosian).

The Longhorns added eight new players to the 24-player roster, including transfers Molly Jacobsen and Brianna Cantu. Cassie Roche, a transfer from Texas Lutheran, tore her ACL and has left the team.

“The hardest part for us this fall was just actually getting team bonding going. We couldn’t really formally get together as a group because of Covid and distancing rules, so it was hard to kind of really get to know each other,” White said. “Typically in the fall we do a lot of team bonding activities like ropes and military exercises, which we weren’t able to do.”

Another obstacle to overcome has been overcoming injuries.

“I don’t know if we ever really had a full team for one practice,” White said. “It was an unusually challenging fall even without the Covid.”

But the Longhorns have tried to find ways to establish closer relationships and keep the culture strong by meeting safely in smaller groups whenever possible.

They know the true test of their cohesion will be coming soon.

“Obviously adversity brings out what happens so you don’t really know until you start playing games on the road,” White said. “But right now, I think we have all come together really well and I think we have addressed some of the things that typically happen when you bring in new players.”

Along with Jacobsen and Cantu, Texas added six true freshmen to the program.

Jacobsen had some knee issues this fall, and didn’t get to pitch in any scrimmages.

“But with the work done with her, she is going to really give us some depth in the pitching department, not only from experience but also with her left-handed ability to use that as a weapon,” White said. “She definitely has some different pitches.”

Cantu appeared in 16 games last season as a freshman at Texas Tech. The utility infielder batted .200 with two doubles and two runs scored in 20 at-bats.

“The first thing that stood out to me is her play at third base. She is fearless, and you have to be able to be fearless,” White said. “She has good hands and is a bulldog. Offensively, we found some things we are working on with her. But just her presence is good for us.”

Freshman Jordyn Whitaker hit .444 with 10 doubles and 14 home runs as a junior at Jacksonville (Texas) High.

“She has got the highest swing speed of the team. She can really bomb it,” White said. “I am excited about her ability to hit the ball with power as a freshman.”

“She hurt her knee in the fall and is just starting to come back now. She is progressing really well and I will be excited to see her back competing for time at shortstop.”

“She has a cannon for an arm,” White said. “She has the strongest of our throw speed on the team. She can be at an outfield position for us possibly.”

Six-foot-one freshman right-handed pitcher Ryleigh White was 20-2 with a 0.62 ERA and 277 strikeouts in 136.0 IP while batting .422 with nine home runs and 36 RBIs at Immaculate Heart Academy in New Jersey.

“She progressed really well in the fall,” White said. “What I like about her is she is not afraid. You can throw her in any situation and she will perform.”

The Longhorns have more depth than ever in the circle this season with their aces returning and the addition of Jacobsen and White.

“Courtney Day was a good surprise last year,” White said. “She had some good results against good teams. She came in against Washington and did a really good job for us in that win.”

GREATNESS: The 11 best college softball pitchers of all time

“She was really strong this fall,” White said. “We have six pitchers, and I feel confident that we can use them all too. They will all have roles within our program.”

The prolific Longhorns led the nation in batting average (.376) and total doubles (62) in 2020. They scored more runs in the first 27 games (199) than any other team in program history.

“She is the most underrated player in the country. I don’t know why she is not up for national player of the year honors,” White said. “She is tremendous and so consistent day in and day out working her tail off to get better each week as well.”

“She is swinging the bat very well. I am looking for this to be a breakout year for her,” White said. “Last year, she was looking like it would be a career setter for her even in a Covid year.”

“She is very good at being unpredictable if that is such a thing,” White said. “She looks poor for a couple of swings and then the next thing you know ‘boom’ she hits one. She is a doubles machine. She hits a lot of balls off the wall and we have a big ballpark.”

“She is a big-time RBI person for us in the top half of the lineup year in and year out,” White said. “I have always said with her, she would be an All-American with her tools of strength, power and ability to run. She hasn’t put it together in a season, but it’s great timing for her this year.”

“Mary just looks the part. She had some swing faults, but I think she eliminated those this fall,” White said. “She was really swinging the bat well. I am excited to see her hit this season.”

“She has all the tools and had a great fall for us. She is someone to look out for. She got that ‘aha’ moment and something clicked for her,” White said. “Physically, she is very impressive and she’s got a good swing. Hopefully she will break out for us.”

The members of the team’s leadership council have been selected by the coaching staff in the past. But starting this season, the players will be selecting the choices.

“We kind of maintain that everybody is a leader,” White said. “The title is not given, it is earned. We are seeing some good things with it. We just want to build with it going forward.”

By meeting with the players, the coaches generally hear the same names come up when it involves leadership responsibilities.

“Mary is like that motherly figure that really is reaching out and leading, not only with her voice but also with her actions,” White said. “She is one that is constantly there.”

Adams was instrumental in keeping the team culture strong during the offseason as well.

“Sometimes you see a player that is not necessarily making the biggest contributions on the field step forward,” White said. “She was really galvanizing for the team in reaching out and building the cohesion.”

Even Jacobsen hasn’t waited long to make her presence felt.

“Sometimes transfers are a bit standoffish and afraid to put themselves out there,” White said. “But she has a great personality and is reaching out and getting people to mingle a little bit more and get to know each other.”

The Big 12 Conference coaches met weekly in November and December to discuss as many scheduling contingency plans as possible given the fluidity of Covid-19.

“At this point, we are waiting as long as we can to see what we can do,” White said. “We want to try and complete a full season. We don’t want to cut down and put ourselves in a corner where we can’t back out of. Our conference is still holding off to stay at three game for weekend series and not go to four games and the same time frame for the conference tournament.”

One Covid protocol that has already been approved in the Big 12, according to White, is if a team is down to 13 players, and less than two pitchers and one catcher, it can elect not to play the game.

“The only other thing for us that has changed is we are not flying anywhere other than Iowa State for conference games,” White said.

The Longhorns are scheduled to host Alabama and Arizona in a season-opening tournament, and White is hoping that remains on the schedule for all three programs.

“We are really excited about that,” he said. “That is going to be a tough one.”

“That has been a big key for us. We are excited to get that going,” White said. “We haven’t really even used it yet.”