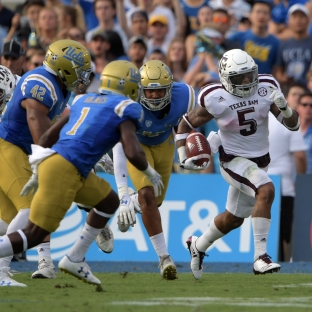 And get this — all of that production came in the first half alone. Through three quarters, he had 20 carries for 201 yards and two scores. As a team, Texas A&M had 50 rushes for 345 yards and five touchdowns through the first three quarters.

RELATED: Lamar Jackson’s run for a Heisman repeat is on

The sophomore running back appears to be well on his way to an excellent encore of a season after being named to the Freshman All-SEC team last fall, when he became the first true freshman in program history to rush for more than 1,000 yards in a season.

The Aggies led the Bruins 38-10 at halftime, as Williams added a 61-yard touchdown run just before the half ended.

His first score of the game came in the first quarter, when he sprinted to the left pylon virtually untouched for a two-yard touchdown.

The Aggies brought out their scepter after they jumped out to a big lead.

Aggies’ mood at the half pic.twitter.com/y6OnK58oI3

Who knows what Williams’ final stat line will read with 30 minutes of game action left.