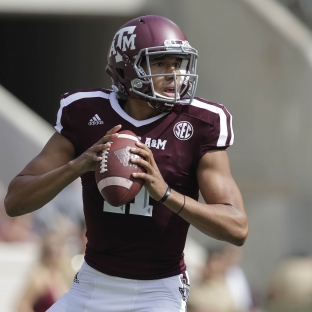 COLLEGE STATION, Texas — Texas A&M freshman quarterback Kellen Mond has improved in each of his three games this season.

The question for the Aggies is has he improved enough to help A&M be successful when Southeastern Conference play begins Saturday against Arkansas.

Mond played his first full game in a 45-21 win over Louisiana-Lafayette on Saturday after splitting time with Nick Starkel in the opener and Jake Hubenak in Week 2. Mond had 301 yards passing with three touchdowns against the Ragin’ Cajuns, becoming the first true freshman in school history to pass for 300 yards.

Mond has been adjusting to a different style of play since coming to Texas A&M as one of the top dual-threat quarterbacks in the nation after throwing for 1,936 yards and 20 touchdowns and running for 775 yards and 18 more scores as a senior at IMG Academy last year.

.@thekellenmond was 21-of-34 for 301 yards in the win. Here’s a look at his 3 touchdown passes. #12thMan #ULLvsTAMU pic.twitter.com/nAcJIsLnXK

“With quarterbacks you learn more about them as you go along — what their strengths and what their weaknesses are,” coach Kevin Sumlin said. “He stood in there and threw some really, really good balls and took some hits last week. Those were some things we hadn’t seen from him before instead of just bailing and running.”

Mond’s talent and athleticism were undeniable from the moment he took over when Starkel was injured against UCLA. But in the last two weeks his teammates have also seen his evolution as a passer.

“He’s definitely (shown) poise in the pocket,” receiver Aaron Hansford said. “He’s becoming a better pocket passer. He’s a great run-threat, but just seeing him be tough in the pocket, taking hits that quarterbacks wouldn’t like to take has been real impressive.”

Sumlin said his improvement on Saturday was also a product of more receivers making plays after some of them failed to do so in the previous two weeks. The Aggies are looking for ways to get star receiver Christian Kirk more involved after he was limited to 14 catches for 141 yards through three games.

Kirk finished with 1,009 yards receiving as a freshman and had 928 yards receiving last year. Sumlin knows Kirk is probably frustrated with his decreased production this season, but was quick to point out that his mere presence on the field helps the entire offense.

“The misnomer is that because … he’s being doubled, you have to have another receiver that takes the place of that,” Sumlin said. “I think what you saw in a couple of these games was our ability to take advantage of that displacement of defense … and running the ball the other way for long yardage because they’re minus-1 that way.”

That was most evident against UCLA when the Aggies ran for 382 yards in a game that included 72- and 61-yard runs by Trayveon Williams.

“So he’s still helping us, trust me,” Sumlin said. “He’s helping the run game as much as anything by taking two guys with him to the other side of the field.”

The offense should get a boost this week with the return of Williams, who was injured Sept. 9 against Nicholls State and didn’t play last week. Williams became the first true freshman in school history to rush for more than 1,000 yards last season and has piled up 256 yards and three touchdowns in just two games this year.

Sumlin knows his offense will be in for a challenge this week in facing a defense which rarely gives up big plays.

“That tells you a lot about what kind of defense they have,” Sumlin said. “Keeping things in front of you making you throw into tight windows if you’re going to do that … we’ve got to be patient with what we do.”

This article was written by Kristie Rieken from The Associated Press and was legally licensed through the NewsCred publisher network. Please direct all licensing questions to legal@newscred.com.