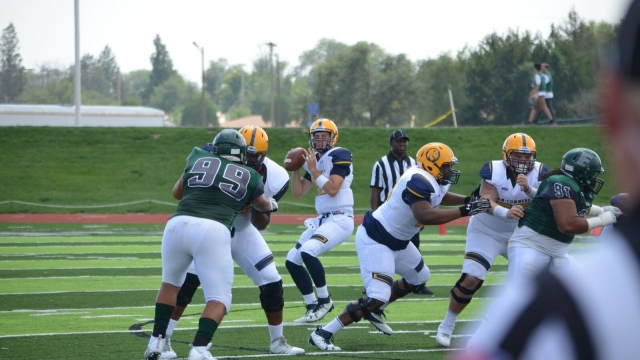 Luis Perez doesn’t always play quarterback. But when he does, he’s the most interesting man in DII football.

Perez is the starting quarterback for Texas A&M-Commerce. Last year, he threw for 3,326 yards and a program-record 32 touchdowns as his Lions made it to the NCAA postseason after yet another Lone Star Conference title.

Thanks to the arm of Perez, the Lions were considered real contenders in 2017. They opened the season ranked No. 5, with a huge matchup against then-No. 6 ranked North Alabama, the 2016 national runners-up. While the game didn’t go particularly well for Perez — he threw for 179 yards and an uncharacteristic three interceptions — Texas A&M-Commerce got the win behind a rather interesting score of 8-7.

“I was amped up,” Perez said. “There was a big crowd and it was a new environment. I got to tip my hat to UNA, their defense is fantastic. But we got to give it up to our defense. Only giving up seven points on busted coverage, what else can you ask for? I’m glad we came out with a win.

“When we came out with that ‘W’ last Friday, we were like, ‘You know what? We have a chance to be really, really special.’ As the leaders, we’re trying to motivate the team, and let them know that this is the year that we have a real opportunity to go really far and deep in the playoffs.”

So, what’s so interesting about Perez?

For one, his road to the football field wasn’t the typical path most quarterbacks take. Actually, it was more of an alley. A bowling alley.

The right-handed gunslinger did not play a single down of varsity football in high school.

RELATED: Luis Perez is one of 11 big impact players in DII football

“My freshman year of high school, I showed up as a quarterback,” Perez explained. “The coach brought me in a room after the tryout and told me he liked me at the receiver position. That was the same time that bowling was starting to hit and I was getting pretty good. I was getting caught up between both, but I stuck with it. I played wide receiver because it was best for the team.

“But little by little the love for football went away. Especially in a Wing-T offense, I would just block, block, maybe run a fade. My sophomore year I decided I was going to go the bowling route.”

Perez wasn’t simply a good bowler. The future DII starting quarterback has tallied a perfect 300 score 12 times, most recently in 2014. He walked away from football, not even going to a game until the last home game of his senior year of high school

“I’m sitting in the stands, and I’m like, ‘Holy cow, what am I doing?'” Perez said. “That was kind of the first red flag, there was something wrong. I shouldn’t be up here, I should be on the sidelines.”

Even when Perez left football behind for bowling, his ultimate dream was to be an NFL quarterback. Try as he may to suppress that, it never went away. Attending that game changed everything.

And A&M-Commerce is grateful.

“The moment I graduated I got a quarterback coach,” Perez said. “I could throw a football, but I didn’t know anything about coverages, fronts, or routes.”

He walked on at Southwestern, on the junior college circuit. Of course, if he won the job straight out of the gates, this wouldn’t be half the story it is.

“I was a ninth-string quarterback going in,” Perez said. “But I was the first one there, and the last one to leave. I was trying to make a statement: I’m here and I’m not going anywhere until I get an opportunity. The coach said, ‘We really don’t need you’, and I told him I was sorry, but I wasn’t going to leave. People switched positions, people transferred, injuries happened, and before you know it I ended up being fourth somehow. I got in the mix a little bit.

“I ended up winning the second-string spot. And then the starter goes down in Week 4 or 5. I go in there and throw two touchdowns in the second half and we end up winning. I started the week after that, threw for three touchdowns and ran for one. Three games after that, I break my leg. I was devastated, I was so close to where I wanted to be. But then I ended up beating out the San Diego player of the year my sophomore year. I started, but we both played a lot. Then A&M-Commerce called me up. It was a no-brainer for me.”

He threw for 18 touchdowns and just three interceptions sharing time as a sophomore after missing all of the spring from that broken leg. Perez redshirted in 2015 before becoming the record-setting field general for the Lions. From wide receiver to the bowling alleys, somehow, some way, Perez is now the starting quarterback for the No. 3 team in DII football.

Who still finds time to bowl with his friends on his breaks, of course.

“Some of them already know what’s coming,” Perez said laughing. “So they’re like ‘I’m on your team or I’m not playing against you.’”

Interesting is what Perez has been surrounded by his entire life. It’s part of the Perez boodlines. One of his great gandfathers was a famous bullfighter, credited with making it the event that it has become. His other great grandfather, as well as a great uncle, were professional opera singers. He has a great uncle — Luis Gimeno, Jr. — who happens to be one of the most famous actors in Mexico City. His grandmother was a professional ballet dancer, which she passed on to his mother, who still teaches dance (although he makes it very clear that the dancing genes were not passed down his way). His father was a professional soccer player who earned a trip to the U-20 national team and played for various teams during a career that spanned from 1981 to 1995.

How has all that rubbed off on Perez?

Perez looks to improve on a 2016 that saw him break the school record for touchdown passes.

Favorite opera: I guess you can say I like it, but I don’t really listen to it.

Then what’s in the headphones pregame? I click Pandora and I have a few different stations of all kinds of different music. I click it and I hear everything.

Favorite soccer team: To be completely honest, soccer was never my sport. My dad always teased me about that. So, I always rooted for the teams my dad played for.

Well, then, favorite football team? San Diego Chargers. They moved to L.A., that hurts a little bit. [I watched] Drew Brees and Philip Rivers. I actually got a chance to work out with Brees and his backup Chase Daniels this summer.

Favorite football movie: Blind Side. (Any surprise that Perez picks a movie about a hard-fought trip to the top?)

Pregame meal: I don’t have a food, but I do drink orange Pedialyte every night before a game.

Superstitions: I have this underwear that has footballs all over it. I wear that every game. I have an Aaron Rodgers shirt, I try to copy how he plays the game. I wear his shirt pregame and after the game and when I walk around the field after taking laps.

Yes, indeed. Perez has had a very different rise to DII football. Now all that’s left for the senior is the final chapter. You can be sure that it will be interesting.