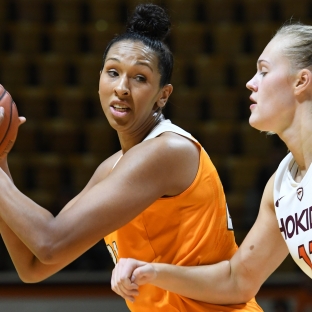 Tennessee women's basketball: Lady Vols' Russell has no regrets about opting to return

KNOXVILLE, Tenn. — Tennessee center Mercedes Russell has no regrets about opting to return to school rather than turn pro, even if the makeup of her team has changed quite a bit since her decision.

Russell and Diamond DeShields announced separately after the 2016-17 season that they both planned to come back to the Lady Volunteers this year, which figured to give Tennessee one of the nation’s most talent-laden rosters.

Much has changed since. Guard Alexa Middleton transferred to Iowa State, guard Te’a Cooper left for South Carolina and DeShields changed her mind and launched her pro career. All those exits leave Russell teaming up with senior Jaime Nared to lead a squad relying heavily on freshmen.

“Honestly, I never second-guessed my decision to stay,” Russell said.

Russell wants to help Tennessee bounce back from a season in which it went 20-12 and lost to Louisville in the second round of the NCAA Tournament, just the second time that the Lady Vols hadn’t reached at least the round of 16 since the NCAA started running the event in 1982.

Tennessee’s chances of improving depend in part on whether the fifth-year senior can build on the progress she made last year.

Rated as the nation’s No. 1 prospect in her class by multiple services when she arrived on campus, Russell struggled with foot problems early in her career. The 6-foot-6 center sat out the entire 2014-15 season to recover from surgeries to each of her feet.

But she came up strong last year by averaging 16.1 points — up from 9.9 in 2015-16 — and 9.7 rebounds. She had the fourth-highest single-season rebounding average in Lady Vols history.

“I definitely want to average a double-double,” Russell said. “That’s a big goal for me this season.”

Russell knows she must become a more physical player to succeed at the pro level. Although Russell improved from the line last season, she has made just 60 percent of her career free-throw attempts and must continue upgrading her accuracy.

That helps explain why Russell realized for much of her junior season that she needed to stay one more year.

“Obviously it’s a tough decision just because it’s the decision between going pro or staying in college,” said Russell, who already has earned her communications degree. “But I think I was always more on the staying side, no matter what.”

Russell’s basketball IQ could enable her to take another step forward this season.

“She’s one of the smartest players I’ve ever been around,” Tennessee coach Holly Warlick said. “She could be a point guard truly (the way) she knows the game. And she’s willing to learn. She doesn’t think she knows everything, but she does know a lot. Her knowledge of the game, her ability to decipher things, it’s a point guard mind. It’s incredible, really.”

Happy Birthday to the real Slim Cedes! Everyone show @mersladezz some love on her special day! pic.twitter.com/CW1sMJtaz1

Russell and Nared got a head start on the upcoming season by helping the USA Basketball Under-23 team win a gold medal at the U24 Four Nations Tournament in Tokyo this month. They now get a chance to show what they learned to a Tennessee freshman class that was ranked No. 1 in the nation by multiple recruiting services.

As a former No. 1 prospect herself, Russell understands the pressure facing these freshmen.

“It’s a lot tougher than people think,” Russell said. “Social media’s so big nowadays. Everybody’s tweeting you, writing you on Instagram expecting you to do this and that when you haven’t even played a college game before. The level of play is so different from high school to college.”

But she also believes this freshman class is “going to do great things” at Tennessee. Her faith in the newcomers helps explain why Russell says Tennessee’s expectations haven’t changed even after all those offseason departures.

“I think the expectations are still the same, honestly,” Russell said. “We’re expected to do a lot, being Lady Vols and playing at the University of Tennessee.”