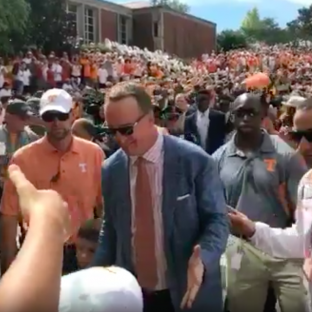 Before Saturday’s game between Georgia and Tennessee, former Volunteer Peyton Manning stopped by Neyland Stadium so his alma mater could honor him for being inducted into the College Football Hall of Fame.

As you may have guessed, more than a few people were excited to see Peyton back on campus:

The Vol Walk scene looked pretty impressive as Manning and his family made their way through the throng.

Manning, who played from 1994-97 was one of the greatest quarterbacks in Tennessee history. He completed 62.5 percent of his passes over four years, throwing for over 11,000 yards and tossing 89 touchdowns. In his senior year, he won the Davey O’Brien award, the Maxwell award, and was named the SEC Player of the Year.

If you want to re-live a little more of the Manning era in Knoxville, the Tennessee athletics department put together a pretty neat video about his time with the Vols that’s worth a watch:

And then, when Manning was honored by the Vols at halftime…

A ray of light in these dark times… Peyton Manning honored at halftime for his College Football Hall of Fame induction. pic.twitter.com/FpOYkspolJ

…the legendary quarterback himself came out on the field to throw one last pass for Tennessee, which of course was a touchdown:

They sure love their Peyton Manning in Knoxville.