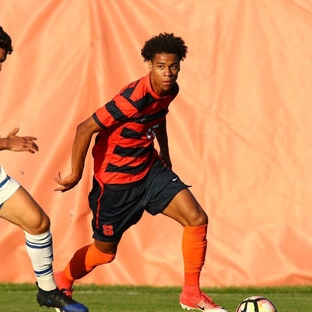 ST. LOUIS, Mo. – Freshman Tajon Buchanan’s first collegiate goal was the game winner in overtime as the No. 8 Syracuse men’s soccer team defeated Saint Louis, 2-1, in come-from-behind fashion in the season opener for both teams.

“It was a terrific, gutsy win on the road in a tough environment,” said Syracuse head coach Ian McIntyre. “Both teams will get better for sure, but for a young team with so many new players, to get behind and then come back – I’m very proud of this group.”

GOALLLL!!!! What a great way to start your @Cuse career! The freshman scores off a Delhommelle cross! pic.twitter.com/r3DBUGqS4J

HOW IT WAS DECIDED

Saint Louis scored the first goal of the match in the 72nd minute on a goal by Jacob Krupp off an assist from Spencer Jones. The Orange answered in the 80th minute. Junior Jonathan Hagman, who hit the post earlier in the half, fired a shot from the top of the box into the top corner of the goal off an assist from junior Adnan Bakalovic, who recorded his first career point on the play.

Both goalkeepers made saves in the final eight minutes of regulation to send the game to overtime. The Orange dominated the extra period, earning two corner kicks in the first three minutes. The game winner came in the 95th minute when junior Hugo Delhommelle (Rennes, France), who made his Syracuse debut in the match, crossed the ball from the right side to the far post to Buchanan, who found the back of the net to give the Orange the victory.

Syracuse has now won two consecutive season openers and nine of its last 13. In addition, the Orange are now 35-4-1 against non-conference opponents during the regular season since 2012.

Syracuse continues its season-opening road trip on Sunday, Aug. 27 when it takes on SIU Edwardsville at 7 p.m.