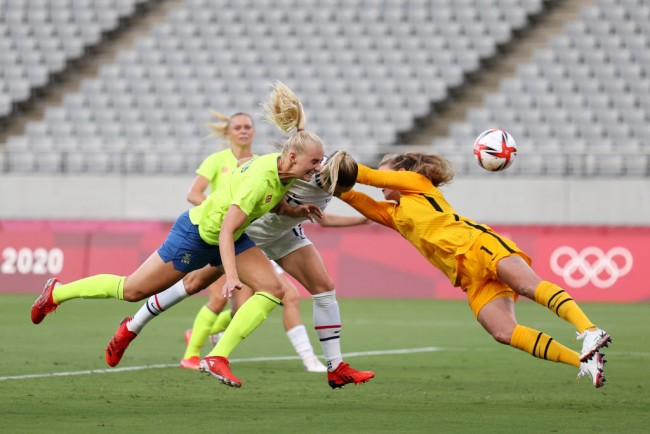 The US women‘s national team’s Tokyo Olympics campaign got off to a horrible start as the Americans suffered a shocking 3-0 loss to Sweden in their opening group stage match. It was a disappointing defeat for the US women’s team, who had its 44-match unbeaten streak snapped.

The match was billed as one of the ties of the tournament as it pitted the reigning World Cup champions US women’s team against Olympic silver medalists Sweden, the team that eliminated the United States in Rio 2016. It was one-way traffic, however, as the Swedes dominated the Americans right from the get-go.

Sweden dominates the US women’s team in the first half

Sweden, currently ranked fifth in the world, stormed out of the gates, immediately creating three shot attempts in the game’s opening eight minutes. Their efforts were finally rewarded in the 25th minute when Stina Blackstenius gave Sweden the lead with a header from Sofia Jakobsson’s cross.

US goalkeeper Alyssa Naeher did her best to keep the team in the match, making five saves in the opening half to stop Sweden from doubling its advantage. The Americans almost entered the half-time break level, but midfielder Rose Lavelle’s header in the 45th minute off Christen Press’ corner kick agonizingly hit the post.

The Swedes deserved more than the 1-0 advantage they enjoyed at the interval as they dominated the Americans in the game’s opening 45 minutes. Sweden trumped the US 11-3 in shot attempts, with the Americans also conceding seven corner kicks.

After his side’s poor showing in the first half, US head coach Vlatko Andonovski decided to make some changes, introducing Julie Ertz and Carli Lloyd in place of the ineffective Alex Morgan and Sam Mewis.

Sweden scores two more goals in the second half

That move failed to galvanize the team as it was Sweden who scored the next goal. The Swedes doubled their lead in the 54th minute, with Blackstenius the goal-scorer once again, bagging her second from a rebound off a corner kick.

With their backs against the wall, the four-time Olympic gold medalists made a third change, inserting Megan Rapinoe in place of Tobin Heath. That substitution almost paid dividends soon after, but Sweden goalkeeper Hedvig Lindahl thwarted Rapinoe’s attempt.

The Americans continued to pile on the pressure and hit the woodwork again in the 71st minute, with Press striking the post with her effort. That miss proved to be costly as Sweden scored with their ensuing counter-attack, with Lina Hurtig nabbing Sweden’s third and final goal. She blasted her header into the roof of the net for the final 3-0 scoreline.

The defeat heaped more pressure on Andonovski, who lost his first match since taking over from the great Jill Ellis in 2019. Sweden has been a tough nut to crack for the US women’s team this year. The two sides battled each other to a 1-1 draw back in April, the only blemish to the Americans’ immaculate 2021 record of 11 wins in 12 matches before the Olympics.

The unexpected loss brings back painful memories of the US defeat in Rio 2016, which was the Americans’ earliest exit in the Olympics. They will look to get their Group G campaign back on track against New Zealand this coming Saturday.