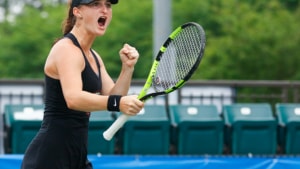 To earn a trip the finals, Stanford defeated a rallying North Carolina squad, 4-2. The Cardinal faced a Bulldog team that had earned its semifinal win 4-2 win over Duke.

The semifinals and championship matches took place from May 18-19 at the USTA National Campus in Orlando, Florida, hosted by the UCF and the Greater Orlando Sports Commission. The final were be played at 5 p.m. on Sunday and were aired on the Tennis Channel.

In quarterfinal action Duke beat South Carolina 4-1 to book a ticket to Saturday’s semifinals, and Georgia survived a tight semifinal match against Vanderbilt 4-3. On the other side of the bracket, North Carolina and Stanford each defeated their respective opponents 4-1.

The tournament began with a field of 64 teams on May 3.

All matches will be played as regulation dual matches. Three doubles matches consisting of six-game sets will be played for one team point, followed by six singles matches, each valued at one team point; played the best of three sets. No-ad scoring will be used and a seven-point tiebreaker (first to seven points, must win by two points) will be played at six-games-all. The team winning four or more team points advances in the championship bracket.

During the championships, all matches were stopped after the doubles point was decided. All remaining individual matches were be stopped once a team winner (four points won) has been determined. The score reflected completed matches.

Below, you can find participating teams, stats and results from each quarterfinals match-up, as well as how to watch to remaining three games in the tournament