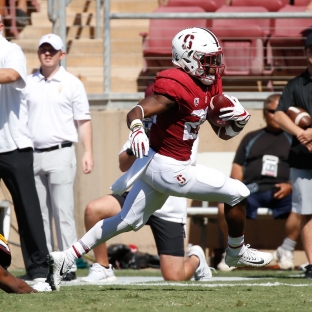 Last weekend in Stanford’s 58-34 win over UCLA, Cardinal running back Bryce Love elected to remain on the sideline in the fourth quarter despite needing just 25 more rushing yards to break Christian McCaffrey’s school record. He did so because his predecessor “would have done the same thing.”

Fast forward one week later, whether or not good karma was a factor, Love broke Stanford’s record with 301 yards on the ground in the Cardinal’s 34-24 victory over Arizona State Saturday afternoon.

Love ran for three touchdowns on the day and through five games this season he’s totaled 1,088 rushing yards and eight touchdowns on 11.1 yards per carry. With the win, Stanford improved to 3-2 (2-1 Pac-12) and Love has entered the Heisman conversation.

Love also joins McCaffrey as the only other Stanford running back to have consecutive 200-yard rushing performances. He finished with 263 yards against the Bruins last week,

If the sheer numbers weren’t impressive enough, Love’s three touchdowns came from 61, 43 and 59 yards out and he averaged 12.0 yards on 25 total carries.

Check out some highlights from the Cardinal’s win here:

Here’s what Stanford Coach David Shaw and Love had to say about the win: