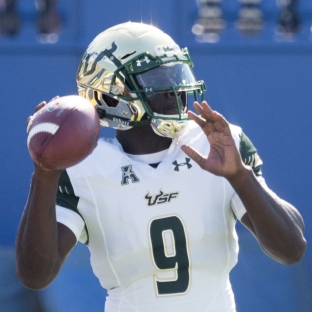 South Florida vs. Temple preview: No. 21 Bulls seek revenge of Owls in AAC opener after 2016 loss

TAMPA, Fla. — No. 21 South Florida is still smarting from a loss to Temple that cost the Bulls a chance to play for last season’s American Athletic Conference championship.

The Owls spoke candidly afterward about how they were able to impose their will during a 46-30 upset, leaving USF to wonder what might have been had a leaky defense done a better job stopping the run that night in Philadelphia.

Fast forward 11 months, and the Bulls (3-0) can hardly wait for a rematch Thursday night against the defending AAC champions (2-1) at Raymond James Stadium.

“It’s going to be a very physical game,” USF coach Charlie Strong said. “We know what Temple did to us last year. Some things were said. I just told our players, you can’t worry about last season. We’ve just got to stay locked in, and just go play our game.”

Under the lights on ESPN. The nation will be watching us.

Both teams finished 7-1 in league play last fall, with Temple representing the Eastern Division in the conference title game, where the Owls beat Navy.

First-year Temple coach Geoff Collins said the Owls (2-1), who’ve won two straight after falling 49-16 at Notre Dame on Sept. 2, know it won’t be easy to come into Tampa and win.

Got the W at our ! pic.twitter.com/2Sx2DkdKaS

USF routed then-No. 21 Temple here two years ago, handing the Owls their only league loss on the way to the first of two consecutive appearances in the AAC championship game.

“I think they understand the challenge ahead,” said Collins, who replaced Matt Rhule after the former Temple coach moved to Baylor.

RELATED: Seven of the most-played college football rivalries of all time

Some things to know about the Bulls and Owls, who’ve won two of three previous meetings between the teams:

USF also has changed coaches since last season’s matchup in Philadelphia, with Strong taking over after Willie Taggart left for Oregon. The Bulls have scored at least 30 points in a nation-leading 20 consecutive games, and Strong thinks he has the makings of a dominant defense, too.

Temple rushed for 319 yards against USF last October. The Bulls think they’re better equipped to contain the run this time.

Owls QB Logan Marchi is the most accomplished passer USF has faced this season. He’s thrown for 787 yards, five touchdowns and no interceptions through three games. Armstead had 91 yards rushing in last week’s 29-21 win over Massachusetts, but the Owls haven’t been nearly as effective running the ball this season.

Strong said USF is preparing to face a balanced attack.

“We have to stop the run,” the Bulls coach said. “If we can force them to throw the football, then that gives us a chance to apply pressure and do the things we can do.”

“Everybody knows that,” the Temple coach continued, “but I think the thing that’s impressive is his poise. … The situation never gets too big for him, and he’s a competitor.”

This article was written by Fred Goodall from The Associated Press and was legally licensed through the NewsCred publisher network. Please direct all licensing questions to legal@newscred.com.