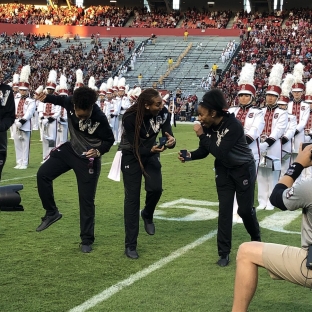 For the defending champion South Carolina Gamecocks, the reward was worth the wait.

South Carolina finished the 2016-17 season 33-4 (14-2 SEC), ending the season on an 11-game winning streak. This year’s Gamecocks, under head coach Dawn Staley, return seven of the 12 players from the championship roster.

Check out the sights and sounds from today’s celebration from Columbia, South Carolina:

We’ve been waiting so long for this. #Gamecocks @dawnstaley pic.twitter.com/TDTTggMYyI

.@dawnstaley and @_ajawilson22 see their #NationalChampionship rings for the first time pic.twitter.com/Yfc8DrQ6gF