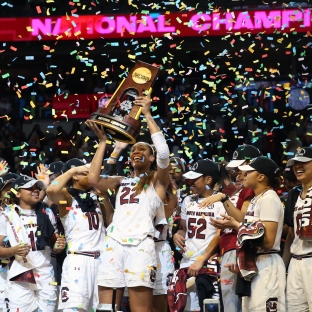 COLUMBIA, S.C. — The national championship “net-lace” is gone and the harsh, angry words are back: Gamecocks coach Dawn Staley has started work on molding a new group to contend at South Carolina.

Staley was not pleased Wednesday with her team’s second day of fall workouts, making players — including All-American A’ja Wilson — run sprints well past the time they were supposed to finish.

“This is going to be a long one,” Staley told them as they lined up for more running.

Staley, starting her 10th season with the Gamecocks, discussed the upcoming season as her players panted and went to the floor a few feet away.

“We’ve got to give them some things they’re going to see throughout the season,” Staley said. “Testing them mentally. They’re failing today, but we’ve got a few weeks to get it right.”

The Gamecocks got it all right a season ago, defeating Mississippi State 67-55 to capture their first women’s basketball NCAA tournament. Staley and her players spent much of the offseason enjoying the benefits that come with winning.

RELATED: After a shocking loss, how will UConn bounce back?

Staley wore a piece of the championship netting she called her “net-lace.” She threw out opening pitches at baseball and softball games and rode in a pace car at Darlington Raceway.

Now, she’s locking things down to prep for this season — one that won’t have most of South Carolina’s national championship lineup. Center Alaina Coates, and guards Kaela Davis and Allisha Gray were all taken in the WNBA draft leaving the 6-foot-5 senior, Wilson, as this year’s focal point.

Felt soooooo good to get back on the court yesterday! Locked in for 2017-18 season! #Gamecocks @dawnstaley pic.twitter.com/BrOh7OXdlh

Wilson and returning point guard starter Tyasha Harris were scheduled to speak to the media. But Staley cancelled those plans.

Staley said the losses among her starting group give opportunity to plenty of younger players this season. The Gamecocks will also have two more experienced players to help in Penn State graduate transfer guard Lindsay Spann and Kentucky transfer forward Alexis Jennings.

NCAA rules allowed Spann to play immediately. Jennings, a 6-2 junior, spent last season practicing with the Gamecocks but could not play.

“Obviously, we’ve got a lot of different faces,” Staley said. “So we’ve got to get them up to speed with how practices run, the intensity level and just expectation levels of what we want.”

Staley said things will be different on the court once the games begin. Wilson will get every opponent’s attention and other players will have to make up for the lost production of Coates, Gray and Davis, who combined for 38.1 points and 19.6 rebounds last season.

MORE: Staley’s ascent is dawn of a new era in women’s basketball

Sophomore forward Mikayla Herbert Harrigan averaged 16.5 minutes a game last fall and started three contests with injuries to Coates. Junior guard Doniyah Cliney will also be counted on to fill a hole in the backcourt.

Every season starts with “This is our circle.” #Gamecocks pic.twitter.com/rau0RXDj3w

Staley sat back and watched her team scrimmage at the end of practice, clapping when freshman Lele Grissett drove the lane for a basket and covering her face when Spann missed an open connection beneath the basket.

“Everything’s pretty competitive,” Staley said. “We want to make sure that our players are going to compete for every drill, compete in all the scrimmages because that’s what we’re going to be faced with all season long. Defending our title, people are going to come at us and we just have to be prepared for that.”

While Staley will also enjoy her national championship moment, she won’t use the term “national champs” with this group until they earn it.

“This is a different team. This is not the team that took the floor last year,” she said. “We’re going to have to things a little different. Things are going to be a little harder. But it’s not an impossible feat for us to get back there and win.”