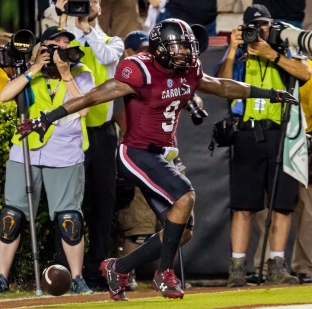 South Carolina football: Gamecocks' defense is starting to click at right time as it prepares for Tennessee

COLUMBIA, S.C. — South Carolina’s defense is making its mark at the right time, forcing turnovers and stuffing opponents to be the driving force in the Gamecocks’ surprising start.

South Carolina (4-2, 2-2 Southeastern Conference) forced four turnovers last week, including three it returned for touchdowns in a 48-22 blowout of Arkansas last week. The Gamecocks have cut down on yardage allowed and points given up from a year ago and lead the SEC with 13 turnovers.

That was not always the case a year ago in coach Will Muschamp’s first season. South Carolina’s defense looked slow and generally a step behind opponents much of the year, infuriating Muschamp at times with their inability to keep opponents out of the end zone.

In the season finale, a 56-7 loss at Clemson, Muschamp gritted his teeth in the postgame when asked how to fix the Gamecocks. “Go to work,” he said.

South Carolina has taken that to heart. The Gamecocks are 11th nationally with 13 turnovers forced with seven interceptions and six fumbles. They’ll take that ball-hawking approach into Tennessee (3-2, 0-2) on Saturday.

Linebacker Skai Moore began the defensive touchdown barrage against Arkansas with a 34-yard interception return to put the Gamecocks up 27-10. Moments later, Stephen Montac took an apparent fumble 38 yards for another touchdown, but that got overturned on review.

“I told the ref he could’ve let me score,” Montac said with a smile.

The Gamecocks did not let the reversal set them back as linebacker T.J. Brunson pounced on a loose ball a few plays later and went 73 yards for a touchdown.

The defensive scoring ended with Keisean Nixon’s 45-yard pick six in the fourth quarter. The three defensive scores a South Carolina record and one shy of the NCAA mark accomplished several times, including by Auburn and Florida.

Muschamp said turnovers come with effort and identifying vulnerable offensive players not protecting the ball the way they should that may be ripe for coughing one up.

RELATED: A complete list of the remaining undefeated FBS teams

“It is so important to be a ball hawk defensively,” Muschamp said “And our defensive staff does a good job of emphasizing that.”

South Carolina quarterback Jake Bentley said his defense does the same thing to him and the offense during practice.

“I just like to say that they know our plays at practice,” Bentley said. “That’s my excuse.”

Gamecocks defenders are constantly looking to dislodge the ball during drills, jumping pass routes and getting into the end zone, Bentley said. Their efforts help South Carolina’s offense better prepare to secure the ball.

“It’s exciting to see them get after the ball and create turnovers for us,” he said.

Tennessee offensive coordinator Larry Scott recalled Tampa Bay Buccaneers coach Jon Gruden telling his defense if they thought they were so good, “Why don’t you score some touchdowns?”

Scott, the former Miami head coach, believes Muschamp has instilled that same philosophy on the Gamecocks.

“They feel like they can score points, make plays and do those things,” Scott said. “They’re playing with a lot of energy.”

Moore, who missed last year because of neck fusion surgery, was frustrated at times last year watching from the sidelines because the Gamecocks were so close to making the plays they make each week this season. “I knew that if we worked hard in the offseason, things would turn it around,” he said.