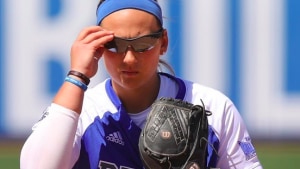 
Most pitchers — in baseball and softball — only dream of throwing a perfect game. Some are lucky enough to achieve it, either in little league, high school, college or the pros. For those that attain perfection, it’s a memory that lasts a lifetime.

But Nicole Newman is not your average pitcher. Far from it.

On Friday, the redshirt senior for No. 25 Drake tossed her fifth perfect game of 2019, setting an NCAA Division I single-season record. The Bulldogs won 7-0 over Bradley in Peoria, Illinois, punching their ticket to the Missouri Valley Conference title game.

In seven innings of work, Newman tallied 18 strikeouts in her 27th victory of the season. Her teammates in the field didn’t need to do much work, as just three balls were put into play all game, with two pop-outs and one fly-out. Of Newman’s 88 pitches, 69 of them were strikes. She helped herself at the plate too, notching a pair of hits.

The win was the 23rd complete game Newman has thrown this season with 10 or more strikeouts. Her 18 strikeouts tied her personal career-high for a single game, and tied a MVC tournament record.

What a week for Nicole Newman! Hear what @newmz4 said about throwing her first collegiate perfect game. pic.twitter.com/TeRHkzn9LW

Newman has long been one of the top pitchers in college softball, being named MVC Freshman of the Year in 2015, and MVC Pitcher of the Year in 2016 and 2018. But she hadn’t thrown a perfect game in college until this season. She nearly notched one her junior year against Valparaiso, but issued a two-out walk in the seventh inning.

SCHEDULE: Dates and times for the 2019 Women’s College World Series

B3 DU 6 UE 0 | 👀 @newmz4 pitches, hits and oh yeah she can field pretty well too! What a play to get the last out! #BeSuper pic.twitter.com/AhglB3WwJo

With five perfect games so far this season, Newman has thrown more perfect games than all of Division I softball saw last season. In 2018, there were just four.

Before Newman came along, only four pitchers in Division I softball had thrown four perfect games in a season. Paige Parker of Oklahoma was the last to accomplish the feat, doing so in 2015. But with five perfect games, Newman is in a class of her own.

Newman is still a few perfect outings away from tying the NCAA Division I career record for perfect games. That record is held by Cat Osterman, who had nine perfect outings by the time she finished her career at Texas in 2006. Newman is tied for fifth all-time in career perfect games with Olivia Galati of Hofstra.

This past week, the 6-foot-1 righty from Madison, Wisconsin was named as one of the 10 finalists for USA Softball Collegiate Player of the Year. In April, Newman was drafted No. 13 overall by the Aussie Peppers in the National Fastpitch College Draft. For the third time in her career, she was named MVC Pitcher of the Year for 2019.

Drake will play Saturday at 1 p.m. against the University of Northern Iowa for the Missouri Valley Conference title and an automatic berth in the NCAA tournament. The game will be broadcast on ESPN+.

With Newman on the mound, Drake always has a good chance to win.