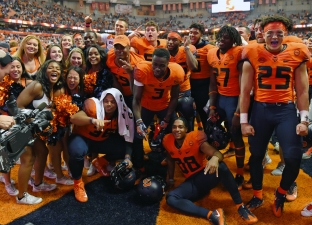 Social media reacts to Syracuse's shocking upset over No. 2 Clemson

Last weekend was the craziest yet in college football with four top 25 teams — including a pair of top 10 squads — falling to unranked opponents. If Friday night was any indication, fans are in for a lot more madness in Week 7.

Unranked Syracuse defended its Carrier Dome with a shocking 27-24 victory over No. 2 Clemson Friday night. The Orange never trailed in their second all-time win over the Tigers. For defending champion Clemson, the loss marked the end of its 11-game winning streak stretching back to Week 12 of last year.

And as you may expect after an upset like that, it was quite a postgame celebration in the Syracuse locker room.

The party is on in Syracuse! pic.twitter.com/QAaupdtvwK

The players weren’t the only ones showing excitement after the win though. Plenty of fans and notable alumni also chimed in, including former Syracuse and NFL quarterback Donovan McNabb:

McNabb led the Orange to their only other win over the Tigers in program history, back in the 1996 Gator Bowl. Here are some more reactions from the Friday night stunner:

Congrats @CuseFootball ! So jealous of you guys right now! Live it up!

Smh, y’all got us https://t.co/mFIJbFplUe

Syracuse defeats No. 2 Clemson 27-24. Biggest win at the Carrier Dome since SU beat No.1 Nebraska in 1984. Incredible. Time to party, ‘Cuse.

In 2017, Syracuse lost to Middle Tennessee St but defeated the defending national champs. Just like we all thought.