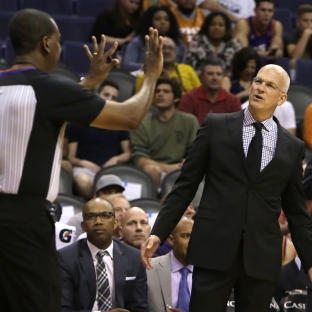 The Phoenix Suns are off to a bizarre start to the 2017-18 season. Just three games into the NBA season, they parted ways with head coach Earl Watson. For the second time in NBA history, a Canadian was named interim head coach

Both times, it was Jay Triano.

Congrats to distinguished Alum, Jay Triano, for his promotion to Head Coach of the @Suns!#proud#sfumbb https://t.co/mMnclR9uVf

Triano played his college hoops for Simon Fraser. Though they weren’t Division II at the time, he stuffed the stats sheets when he was there that his legacy is still known today. He left the school with 11 records, including 2,616 points that were best in the Clans history.

Jay Triano speaks to media after this morning’s practice about being named interim Head Coach, and tonight’s game. https://t.co/8RC5txjD7q

Triano has had quite the journey in his coaching career. He has been all over the NBA and in the Olympics for the Canadian National Team. He was first an interim head coach for the Toronto Raptors in 2008. Now, he takes over a Phoenix Suns team that seems to have a lot of question marks regarding its future. All things aside, Triano led the Suns to victory in his debut, taking down the Sacramento Kings 117-115 on Monday night.