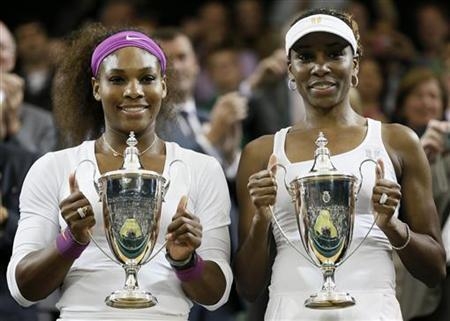 Serena Williams’ loss to Alize Cornet in the semifinals of a tournament in Dubai last month rekindled questions about match-fixing between her and her sister, Venus, right. (Photo : Reuters)

To suggest that Serena and Venus Williams have thrown matches to avoid playing each other may not be fair, but to question some past incidents isn’t entirely unfair, either. Only the Williams family knows for sure.

ESPN.com brought to light a latest accusation about the Williams sister from a fan who made a query to Sports Illustrated.

The question was, “All right, I’ll bring it up: Do you think Serena Williams purposely lost that semifinal in Dubai in order to avoid having to play her sister Venus in the final? Not accusing, just asking.”

To set the stage, Serena and Venus advanced to the semifinals of the Dubai Duty Free Tennis Championship last month. Venus had to play former No. 1 Caroline Wozniacki in the first semifinal, followed by Serena against No. 26 player Alize Cornet.

Venus, who has been battling Sjogren’s syndrome, an autoimmune disease that leaves the older sister without energy, was vying for her first tournament title in two years.

Venus went first and ousted Wozniacki in straight sets. Then Cornet, ranked No. 26 in the world at the time, pulled off a three-set upset of Serena. Venus went on to defeat Cornet 6-3, 6-0 in the final to win the championship.

ESPN, which ends up vehemently defending the Williamses, makes a pretty good argument for the other side to start its column, quoting Sport360.com, a United Arab Emirates site, which accused Serena of “bizarre rationale” in her semifinal loss to Cornet.

“I started out extremely slow. I have been actually looking at a turtle every day,” Serena was quoted as saying. “I think it’s so cute. Maybe I was too influenced about by it. It’s a really cute turtle in the hotel. I need to be able to play better than that if I want to be playing on this tour, on the professional tour. Maybe I can go to amateurs.”

The tanking claims originated at the 2001 Indian Wells during a Tennis Masters Series tournament in which Venus pulled out of a semifinals match against Serena four minutes before their scheduled start, citing tendinitis in her right knee.

When Serena plays Kim Clijsters in the finals, fans rain boos on Venus and their father Richard Williams, who go to their box to watch the match. Serena also reportedly gets booed.

Based on that incident, neither Williams sister has played at Indian Wells since, saying they were the targets of racial insults. Richard Williams echoes their sentiments.

According to another ESPN report, no comments about racist remarks ever were reported to tournament officials. An off-duty Los Angeles Times copy editor sitting near the Williams box said he didn’t hear any racist comments.

It took nine days before Richard Williams made public what he heard at Indian Wells, as ESPN quoted a USA Today article: “When Venus and I were walking down the stairs to our seats, people kept calling me ‘n—–.’ One said, ‘I wish it was ’75, we’d skin you alive.’ … I think Indian Wells disgraced America.”

The ESPN column responding to the SI reader’s question said “it’s wrong” that the tanking/fixing charges don’t go away. But too many questions involving the Indian Wells exist to expect the questions to cease.

Is it fair to question whether the Williams sisters throw matches to avoid playing each other? Tell us @SportsWN