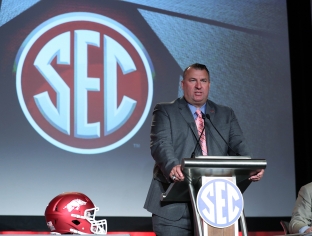 Everybody’s probably guilty of butt-dialing someone at some point or another. College football coaches are no exception.

Take the following tale shared by Arkansas head coach Bret Bielema at Monday’s Day 1 of SEC football media days. Bielema described at the main podium how he mistakenly FaceTimed SEC commissioner Greg Sankey on his way out of Chipotle this past weekend, shortly after arriving home with his new baby daughter.

Bielema said he was walking out of the popular chain restaurant when he heard the call and checked his cell phone. There, he was surprised to see the face of Sankey.

“I recognized the FaceTime, pulled it out and I see Greg Sankey’s name,” Bielema said. ” I said, ‘This is pretty cool, the commissioner is FaceTiming me. That’s pretty unique.’ He said, ‘Why were you calling me? I said, ‘I apologize, I must have butt-dialed you.’ That was a unique experience.”

Bielema was in attendance on Monday in Hoover, Alabama, just two days after his daughter Briella Nichole Bielema was born.

Beyond anything @jenbielema & I could ever dream of as parents. Please welcome Briella Nichole Bielema born 4:44 AM on 7/8/17 weight 7.8 lbs pic.twitter.com/SQ0fL3Aa7C

Monday marked Bielema’s fifth career SEC media day since coming from Wisconsin to Arkansas in 2013. He is the only coach in program history to lead the Razorbacks to three straight bowl games.