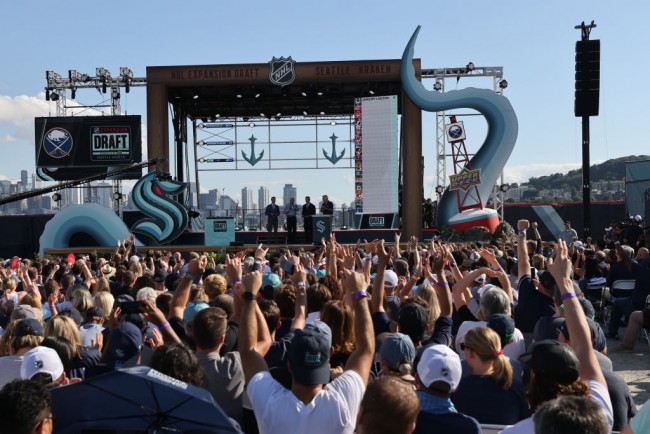 Seattle Kraken Stay Away From Superstars in 2021 NHL Expansion Draft

SEATTLE, WA – JULY 21: Fans cheer during the Seattle Kraken 2021 NHL expansion draft at Gas Works Park on July 21, 2021 in Seattle, Washington. Thousands of free tickets were available to fans to attend this live broadcast event on ESPN2 to watch the Kraken make 30 selections to build their first roster in franchise history. Boats were encouraged to sail-gate. (Photo : Karen Ducey/Getty Images)

Seattle Kraken’s lineup for the 2021-22 NHL season is starting to take shape after making key selections on Wednesday’s expansion draft. The league’s newest expansion team selected 30 players in total, one from every franchise except the Vegas Golden Knights, who did not expose any players as they just entered the NHL in 2017.

Before Wednesday’s draft, the other 30 teams had listed their protected and available players. With the salary cap still set at $81.5 million for next season, many teams had to leave their high-paid veterans exposed in the draft due to the financial crunch.

Price was an intriguing option for the Kraken, given that he just led the Canadiens to the Stanley Cup Final last season. Price decided to waive his no-movement clause and leave himself exposed to the Kraken to help protect Montreal’s backup goaltender Jake Allen.

Price has the highest cap hit of all NHL goalies at $10.5 million per season, with the 33-year-old still under contract for five more years. Price is still unsure whether to have surgery for his hip and knee injuries. That combination of uncertainty and expense made Price take the risk of exposing himself in the draft.

Sure enough, Seattle opted not to get Price in the expansion draft. The Kraken instead selected Chris Driedger as their top goalie for the time being. He had a breakout campaign for the Florida Panthers last season, posting a solid .927 save percentage, which ranked fifth among qualifying goaltenders.

A source said that Driedger, who was scheduled to be an unrestricted free agent this offseason, signed a three-year deal with the Seattle Kraken worth $3.5 million annually during the exclusive negotiating window. Backing up Driedger in Seattle will be goaltenders Vitek Vanecek and Joey Daccord, selected from the Washington Capitals and the Ottawa Senators, respectively.

The Kraken’s main focus on Wednesday’s draft, though, was fortifying their blue line. They managed to do just that by selecting former Calgary Flames captain Mark Giordano and Vince Dunn from the St. Louis Blues. Giordano won the Norris Trophy in 2019 as the league’s best defenseman and was set to become an unrestricted free agent after this season.

They join veteran defensemen Adam Larsson and Jamie Oleksiak in the Seattle roster. Larsson and Oleksiak had agreed on new contracts with the Kraken before the draft show. Oleksiak signed a deal worth $4.6 million per season through the 2025-26 campaign, making him the Seattle player with the longest contract.

Seattle also got some much-needed championship experience by selecting Yanni Gourde from the reigning two-time champions Tampa Bay Lightning. Dunn is another player with championship pedigree, having been part of the St. Louis Blues in their 2019 Stanley Cup-winning season.