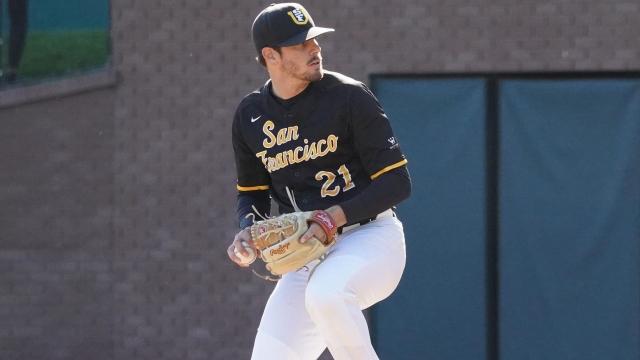 LOS ANGELES — Any way you looked at it, it was going to be a big win.

And the fact that it came on the road to clinch a season-opening series victory over the No. 2 team in the nation made it that much bigger.

Clutch offense in the late innings and standout relief pitching from two freshmen Sunday lifted the San Francisco baseball team to an 8-3 series-clinching win over No. 2 UCLA at Jackie Robinson Stadium.

San Francisco head coach Nino Giarratano sat at 599 career NCAA Division I victories after Friday’s series-opening victory, making the Dons’ next win — whenever it came — the 600th of his career. It came on Sunday, and in a big way, as he reached the milestone with the Dons’ come-from-behind triumph.

“I know people make a big deal out of the 600 victories, but I like to make it about the kids,” Giarratano said. “I’d really like them to get the recognition they deserve for beating UCLA.”

The Dons (2-1) fell behind early when UCLA (1-2) jumped out to 1-0 and 3-1 leads in the first and second innings. Matt McLain hit a two-out solo home run in the first, and Kyle Karros brought home two runs with a one-out RBI double in the second, putting the Bruins up 3-1. But the Bruins’ offense went silent after that, not getting another hit or advancing a runner past second base again until the ninth inning.

Freshman Aidan Lee (1-0) had a strong collegiate debut, throwing 3 1/3 innings of shutout, one-hit relief and striking out four with no walks allowed. He shut down UCLA from the fifth to eighth innings, retiring 10 of the 12 batters he faced, including seven in a row. Returning freshman closer Jesse Barron earned a four-out save, relieving Lee in the bottom of the eighth and throwing a scoreless ninth to seal the win.

“Getting that 3 1/3 from Aidan Lee, that’s what gave us the opportunity to come back,” said Giarratano, “We just went zero, zero, zero. That was huge for us.”

NO. 1 TOPPLES: Miami clinches series against No. 1 Florida with 8-6 win

The Dons’ offense kept things close until it could chase UCLA starter Nick Nastrini. Jacob Munoz tied the game at 1-1 in the top of the second with an RBI single, and Jordan Vujovich’s leadoff solo homer in the third brought the deficit back to one at 3-2. But USF needed to chase Nastrini from the game in order to get over the hump. Nastrini had a career day with 11 strikeouts over 6 1/3 innings pitched.

“That was nice to see the kids answer back,” Giarratano said. “We played tough today. We battled back, we got some big hits and some big two-out hits and the kids kept grinding. They kept getting after it today. I think they really believed they could get it done. It was a total team effort. They were locked in.”

Once the Dons got Nastrini out of the game with runners on first and second and one out, they went to work on UCLA’s relievers for the third straight day. Luke Keaschall poked a two-strike, two-out RBI single through the right side of the infield to tie the game at 3-3. The next inning, Nick Yovetich gave USF the lead for good, scoring on an RBI fielder’s choice after leading off the frame with a double. And then the offense exploded in the ninth, scoring four runs on three hits with five of the first six batters reaching safely to make it 8-3.

USF starter Grant Nechak pitched well in his 4 1/3 innings of work. He settled down after the second inning to retire six in a row at one point and not allow another runner past first base. He finished with three runs allowed (two earned) on three hits, two strikeouts and three walks.

Two Dons had multi-hit games. Harris Williams (2 for 4) hit his second triple of the series and scored a run. Ryan Davis (2 for 4) scored twice —including the game-tying run in the seventh — and stole a base. Brandon Greim’s pinch-hit, two-run, two-out RBI single in the ninth put the Dons up big at 8-3, and Jack Winkler’s RBI single in the ninth was USF’s first insurance of the rally.

For San Francisco, the series victory marks the second season in a row its won a series versus a Pac-12 opponent after also taking two of three from California last season on March 6-8, 2020. The Dons had never beaten UCLA in a series, getting swept in Los Angeles in early 2011, then splitting with the Bruins later that year in the 2011 NCAA regional, also at Jackie Robinson Stadium.

“I think I’ll always remember this one,” said Giarratano. “I won’t have a problem recollecting I was at UCLA on a Sunday to win the series.”

San Francisco next plays a home-and-home four-game series versus East Bay Pac-12 foe California, starting Thursday. The series’ first two games will be played in Berkeley, with games three and four shifting to San Francisco and Benedetti Diamond on Saturday and Sunday. Fans can find all live coverage links on USFDons.com.