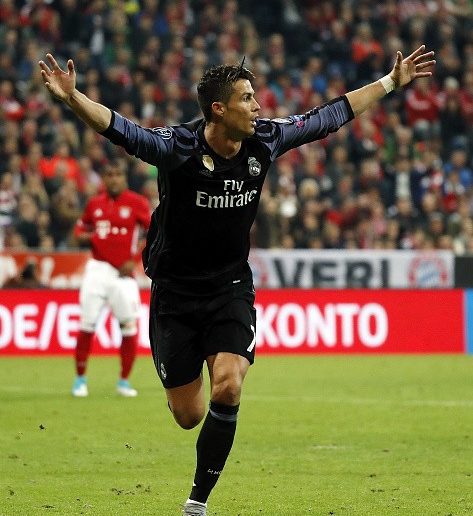 Real Madrid vs Bayern Munich was seen as the flagship match of the quarterfinals of Champions League.  The classic encounter was quite a balanced match where Bayern dominated the first half and Real ruled the second. In the end, Spanish giants won the match 2-1. The next leg will be played next week.

Bayern Munich started the match well and dominated Real Madrid in every area of the field. The German side benefitted from their pressure on Real in the 25th minute when Arturo Vidal scored a header and put his side 1-0 ahead in the match. Soon after the first goal, Bayern and Vidal got one more opportunity to score by penalty but the midfielder failed to score, reports BBC. Real Madrid, on the other hand, didn’t have many chances to score after that goal in the first half.

The second half was all for Real Madrid. Los  Blancos have responded by scoring in the 47th minute. It was Madrid’s Taliman Cristiano Ronaldo again to the rescue. But the second half had gone bad to worse for the Bavarians soon after the goals as Javi Martinez sent off for tackling on Ronaldo. The La Liga leaders then started attacking more frequently on Munich’s defense and Ronaldo scored again in the 77th minute.

Real Madrid has heavily dominated the 10-men Bayern Munich but the Manuel Neuer denied any casualty after the second goal. Now the Madrid has two away goal advantage in their hand and expected to qualify for the next round.

The match was a historical one for Cristiano Ronaldo as he completed his century of goals in UEFA competitions, reports ESPN. Ronaldo had a bad Champions League campaign this season as he only scores 2 goals before the match. He is now three goals shy of 100 goals in the league.