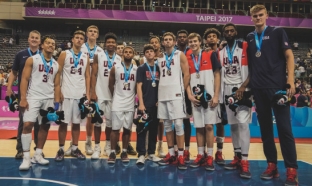 This was the summer Purdue became America’s Team – at least for two weeks on the other side of the planet. Since the USA does not send all-star platoons to the World University Games, but rather a specific college team, some lucky bunch gets a chance to find answers in August, long before Midnight Madness.

Which is why Boilermakers coach Matt Painter sounded like such a happy tourist over the phone. Purdue returned home with the silver – losing only to Lithuania 85-74 in the final – and he would rather have had the gold, but other than that, what’s not to like? He came back with more than T-shirts and an appreciation for Taipei kindness and efficiency.

“Just a total experience that’s really unmatched,” he was saying. And if it makes the Boilermakers that much better come January and February, we can ask the rest of the Big Ten if they enjoyed how Purdue spent its summer vacation.

Take a look back at a once-in-a-lifetime experience in Taipei.#BoilerUp pic.twitter.com/FjfqRQQpb2

Kansas was the USA representative in 2015, won the gold, and then marched to the Elite Eight the next spring. Painter made sure he had a chat with Jayhawks coach Bill Self before he left for the Far East.

“He was gung-ho about how it helped them,” Painter said. “You learn a lot about your team through competition. Sometimes if you go on a regular trip, it’s hard to get highly competitive games. It just is. Everybody’s running into that issue on their trips. But this is different.”

Yep, while the garden variety summer tour includes a handful of games with this club team or that one in this country or that one, the Boilermakers were knocking heads with Argentina, blowing away Romania and Estonia and Serbia, rallying to beat Israel in overtime, playing teams that came after them just as hard as Indiana and Michigan State will.

“The attention that you get representing the USA, it’s a big game to everybody that you play,” Painter said. “To represent your country, that’s pretty special. That’s something for me as a coach that has been beyond belief.”

A final look at Taipei via @AdobeSpark.

An experience we will never forget. #BoilerUp / #MadeWithSpark

It also gave the Purdue veterans a chance to start life without Caleb Swanigan. So there senior Vince Edwards was, averaging 19.3 points, 6.3 rebounds and shooting 57 percent. And sophomore guard Carsen Edwards putting 36 points on Israel. And 6-10 Jacquil Taylor, who has missed most of two of his three seasons with injury, rebounding well to help fill Swanigan’s large void.

Plus, nearly the entire lineup lit up the 3-point line – Ryan Cline’s 57 percent, for example. Until the last night.

“We have a lot of guys returning but yet, we lost arguably the best player in the country. You’ve got to be able to move on. So it was more of us hoping to create an identity with this team,” Painter said. “We have a very good shooting team. But the thing everybody knows about shooting is, no matter if you have the best shooting team in the country, shooting’s not always going to win you games. It’s going to help you win a lot of them, but there’s going to be games the ball doesn’t go in.”

When it didn’t in for the final, and there wasn’t enough defense and rebounding for the Boilermakers to get by, Painter had his teaching moment.

“I think that nugget right there is good from a coaching standpoint, because now you have a reference point before the season starts – OK, here’s how we can get beat. If we don’t shoot the ball well and we struggle to contain the dribble and we can’t rebound, that’s going to hurt us. I think you can learn a lot from a loss.

“You can’t get something like that in the month of August preparing your team in a normal circumstance. We have an older intelligent group. So this isn’t something you’re going to have pound home with them. Once we start the season, they’ll understand, we can’t let this happen to us again.”

Painter understood he had to be careful how physically taxing this was for his players. It’s a long road to March. “The least amount we practiced was twice a week and the most we practiced was three times of week,” he said. “We could have practiced twice a day every day for three or four months if we wanted to. But we’re always going to do what’s best for our players. You don’t need to go after it this time of year. You need to get better, but you also need to keep things in perspective.”

As we return to and our loved ones today, Coach Painter wrote a letter to the residents of #Taipei.

So it was a win-win trip. Well, except for the final game, and Painter figures that might turn out the most valuable day of all in the development of the Purdue Boilermakers.