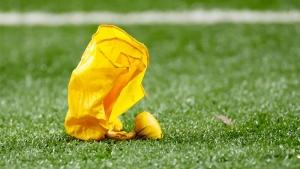 
Players disqualified for targeting might be able to remain on the sidelines starting with the 2020 football season.

The NCAA Football Rules Committee, which met this week in Indianapolis, recommended the rules change Friday. All rules proposals must be approved by the NCAA Playing Rules Oversight Panel, which is scheduled to discuss proposed football changes April 16.

If the rule is approved, players flagged for targeting would remain disqualified from the game. But instead of being ejected and required to head to the locker room following a targeting foul — which has been the rule since 2013 — players would be permitted to remain in the team area. All other aspects of the targeting rule would remain the same.

“In reviewing the trends in targeting, the committee is encouraged and pleased with how the rules have clearly had a positive impact on our game,” said David Shaw, chair of the committee and head coach at Stanford University. “We are encouraged by the improvements in the way our officials, our coaches and our players have worked to keep our game exciting and make it safer. We will continue to look for ways to improve our approach to targeting, but we strongly believe we are on the right path.”

The progressive penalty for targeting also remains. Players who commit three targeting fouls in the same season are subject to a one-game suspension.

Committee members considered whether to make any changes to kickoff plays but after a thorough discussion decided to leave the play as is.

The committee is encouraged by health and safety trends involving the play, as well as recent rules adjustments. Two years ago, receiving teams could fair-catch kickoffs between the 25-yard line and the goal line, with the result being a touchback. Last season, the committee removed the two-player wedge from the kickoff play and added a foul for illegal blindside blocks.

“The goal of the committee is to continue to enhance the safety aspects of the kickoff in order to maintain the play in our game,” said Steve Shaw, secretary-rules editor and national coordinator of officials. “Preliminary results seem to be trending in a positive direction, which is encouraging to the committee.”

Additionally, the committee spent a considerable amount of the meeting reviewing video on low blocks and considering several proposals for adjustment. The committee will continue to evaluate blocking below-the-waist rules and study potential enhancements.

The committee recommended that no more than two players may wear the same jersey number. The rules regarding players using duplicate numbers would continue to require that they play different positions and aren’t on the field at the same time.

Committee members think having more than two players with the same number creates confusion for the referees and makes scouting opponents difficult. To respond to the popularity of single-digit numbers, the committee also recommended that “0” be added as a legal number.

Concerned about negative interactions between teams before officials are required to be on the field, the committee recommended that game officials’ jurisdiction of the contest begin at 90 minutes before kickoff, instead of the current 60 minutes. Another part of the proposal calls for a coach to be on the field during pregame warmups when players are present, and all players are to be identified by number.

For the first time, the committee recommended a guideline for instant replay officials to complete video reviews in less than two minutes. Committee members think this proposal will increase the pace of play.