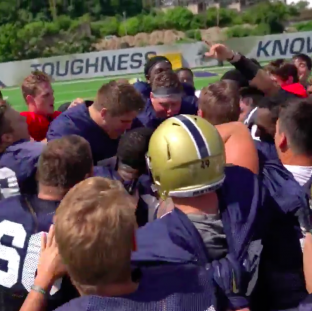 The summer of (former) walk-ons receiving scholarships continued three days before the start to the college football season with Pittsburgh offensive lineman Jimmy Morrissey being the latest surprised recipient on Tuesday.

The redshirt sophomore out of Huntingdon Valley, Pennsylvania, received word of his new scholarship during Tuesday’s team practice.

With the whole team taking a knee, head coach Pat Narduzzi asked offensive coordinator Shawn Watson for his assessment of how the Panthers looked. Watson’s response was that the offense needed to cut down on its ball exchange problems under center. That’s when Narduzzi called for starting quarterback Max Browne and Morrissey to come front and center, leading to the reveal.

As was the case in other videos across the nation, Morrissey’s teammates were fired up by the news and quickly mobbed the Panthers’ newest scholarship athlete.