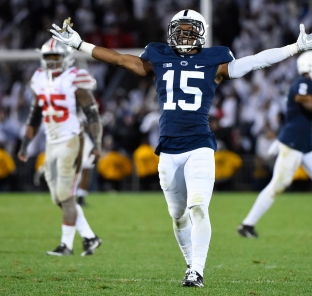 Follow along below for live updates and highlights throughout Saturday afternoon’s battle:

While Week 8 of the college football season featured a few ranked matchups, the excitement was down understandably after Week 7 provided one of the most memorable weekends of college football in a long time.

Now, Week 9 has everything necessary to bring back the chaos to college football.

Let’s dive in to a few of the top matchups this weekend:

No reason to beat around the bush. This is the game we’ve all been waiting for. Last year’s edition didn’t disappoint, as the Nittany Lions handed the Buckeyes their only loss of the regular season, thanks to a blocked field goal returned for a touchdown in the 4th quarter. That game, Ohio State was No. 2 in the country and Penn State was unranked. Well times have changed. The Nittany Lions are now No. 2, while Ohio State sits at No. 6. So how do the teams match up?

Rankings, records, stats? All that goes out the window when Florida-Georgia rolls around. Sure, the Dawgs are undefeated and ranked No. 3 in the country, but Florida has won the last three of these matchups and 21 of the last 27. Still, these are long odds for the Gators. Let’s check out the tale of the tape:

On paper, this game might not look like much for the Clemson, but Georgia Tech has been sneaky good this year. The Yellow Jackets came within a two-point conversion of beating Tennessee to start the season, and fell to No. 11 Miami only after a miracle catch kept the Hurricanes’ comeback alive. In its four wins on the year, Georgia Tech has outscored its opponents 36-15 on average, behind 372.8 rushing yards per game, the No. 2 ground attack in the country. How do they stack up against the reigning champs?

Notre Dame proved that it’s a serious threat this season with a 49-14 win over No. 11 USC last week. The Irish’s only loss of the season came by one point in Week 2 against a Georgia team that looks Playoff-bound. But NC State isn’t messing around either. The Wolfpack holds wins over No. 12 Florida State and No. 17 Louisville (though both have since dropped out of the Top 25) and are riding a six game winning streak.