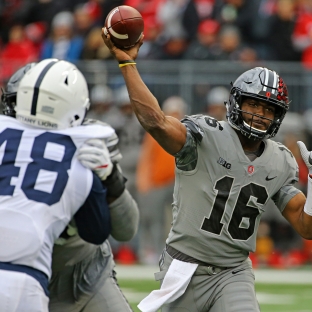 Penn State vs. Ohio State: Buckeyes rally from 15 down to knock off No. 2 Nittany Lions

Saturday’s showdown between No. 6 Ohio State and No. 2 Penn State was billed as “The Game of the Year,” and it lived up to expectations as the Buckeyes fought back from 15 down to topple the Nittany Lions 39-38 in Columbus.

J.T. Barrett stepped up when it counted, completed his final 16 passes, including the winning touchdown, and finished the evening 33 for 39 with 328 yards and four touchdowns, a flawless performance on a huge stage.

When the game began, it seemed Penn State was going to run away from the Buckeyes in a blowout. Saquon Barkley, heading into Saturday the most electric player in the country, returned the game’s opening kickoff for six points, and in less than 19 minutes, PSU’s lead was 21-3.

But Ohio State’s defense kept Barkley in check all game, limiting him to 44 rushing yards, while the Buckeyes chipped away at the Lions’ lead, eventually toppling the previously-undefeated folks in blue and white on an unforgettable night.

Re-live every crazy moment from the incredible matchup below: