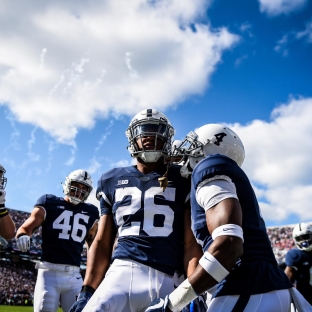 Penn State is ranked No. 2 in the country for the first time in 18 years, and now face a visiting Michigan team with a stout defense looking for an upset.

Stay up to date with everything going on in Happy Valley right here:

by Rich Scarcella | The Reading Eagle

With one of the top defenses in the nation, Michigan mostly has used a conservative game plan on offense this season.

Last weekend, for example, quarterback John O’Korn completed just 10-of-20 passes for 58 yards in a 27-20 overtime victory at Indiana.

“You strive for that perfection. You rarely get there, but you want to be excellent.”

Michigan has scored just 13 touchdowns on offense, the second-fewest in the Big Ten behind Illinois. The Wolverines average just 191.3 passing yards and haven’t thrown a touchdown pass in 21/2 games.

O’Korn, who replaced the injured Wilton Speight three weeks ago, has completed 54.9 percent of his passes for 563 yards and one touchdown with four interceptions. He was just 3-for-9 for 5 yards in the second half and overtime against Indiana.

“(He’s playing) winning football,” Harbaugh said. “(He had) no turnovers against Indiana. That was huge. No sacks. He avoided the plays that will get you beat. That was an emphasis. I thought he did a fine job of that.”

Fortunately for Michigan, Karan Higdon ran for 200 yards and three touchdowns, including the go-ahead 25-yard score on the Wolverines’ first snap in overtime.

“Pass protection, instincts, yards after contact,” Harbaugh said when asked what Higdon’s doing well. “He’s been a tough runner. His balance has improved quite a bit. He’s always been a tough, downhill runner.”

The Wolverines might be struggling on offense, but not on defense.

Michigan ranks first in the nation in total defense (223.8 yards) and pass efficiency defense, sixth in rushing defense (86.8) and eighth in points allowed (14.7).

Defensive end Rashan Gary made seven tackles, including 21/2 for loss, against the Hoosiers. He left the game in the second half with an injury to his right arm or shoulder but returned and finished.

“I can’t say enough about Rashan,” Harbaugh said. “He was the epitome of leaving it all on the field. He’s gotten doubled; he’s gotten chipped; he’s gotten cut. It’s probably the ultimate compliment you can pay to a football player, to see a team have that much concern about one guy.

“He’s earned that kind of respect.”

Penn State running back Saquon Barkley poses a challenge to the Michigan defense. Barkley leads the nation with 217.0 all-purpose yards a game and has scored nine touchdowns, including ones as a rusher, receiver and kick returner.

“He can catch the ball out of the backfield,” Harbaugh said. “He can run all the assortment of runs. He can run inside the tackles and on the edge. He’s a very good pass protector. He’s a multi-purpose back who can do everything well.”