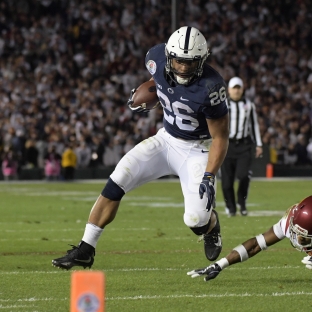 STATE COLLEGE, Pa. — Saquon Barkley bobs his head to Drake’s “Started at the Bottom” as he stands over a barbell loaded to 380 pounds.

The Penn State running back takes a step back and adjusts his shorts before bending down and taking a firm grip on the bar with both hands. With his chin up, back flat and knees bent, Barkley tugs on the gray steel, searching for just the right amount of tension in his arms.

Barkley uncoils, and then quickly dips under the weight and back into squat, slipping the bar under his chin and onto his deltoids. His quads bulging, Barkley stands up straight to complete the power clean. He drops the bar to the mat, takes a couple breaths and repeats the feat twice more with relative ease.

A case can be made that Barkley is both the best and strongest running back in college football. To Barkley, he could not be the former without also being the latter. The broken tackles. The razor-sharp cuts that leave linebackers limp. The hurdles over and sprints past defensive backs. Everything Barkley does to send 100,000 Nittany Lions fans into a frenzy at Beaver Stadium can be traced back to the hours he has spent in the weight room, turning his body into a 228-pound NFL prototype.

“I’m a firm believer that the work you put in in the weight room translates to the field,” Barkley said. “Some people don’t really think it correlates. A lot of people think you have to do football specific stuff and that’s true. But I think football is a direct correlation with weightlifting. I think the stuff that you do — the explosive movements, the leg strength — helps you finish plays. Helps you break tackles.”

Coming off a sophomore season in which he ran for 1,496 yards, scored 22 touchdowns and helped the Nittany Lions finish in the top 10 for the first time since 2009, Barkley was overwhelmingly selected to the AP’s preseason All-America team released Tuesday.

Barkley’s passion for pumping iron was cultivated in a cement basement with no air conditioning beneath the fieldhouse of his eastern Pennsylvania high school. Whitehall was the smallest school in the state’s highest classification when Barkley was there.

Going back to the days when former NFL linebacker and Penn State star Matt Millen played at Whitehall, the Zephyrs have tried to make up the difference in the weight room.

“We were going against bigger schools and teams that had more players and had more opportunities to pick from players so we knew for us to win games we had to push ourselves,” Barkley said.

Barkley did not walk into Whitehall as a star. He wasn’t one of those kids who flashed NFL potential while dominating youth leagues the way Leonard Fournette did before becoming an All-American at LSU and a first-round draft pick by Jacksonville. Barkley was a talented 160-pounder trying to contribute on both sides of the ball during his first two seasons at Whitehall. After his sophomore season, coach Brian Gilbert challenged Barkley to become a leader in the weight room.

Barkley gained 30 pounds and had a breakthrough junior season. It only made him want to do more and it wasn’t just the physical gains that changed Barkley’s game.

“His confidence level went up because of his strength,” Gilbert said.

On the walls of Penn State’s climate-controlled, 13,000-square foot weight room, high above the equipment, hangs the Nittany Lions’ scoreboard: Player rankings by position and team-wide of various lifts and speed and agility drills going back to 2013.

Barkley’s name is on top of all eight categories on the running back chart. He wants to be top three in each category for all players. On a late spring day, he held the No. 1 spot in half the categories, including a 390-pound power clean. His 600-pound squat ranked third behind only a couple of former Penn State linemen.

“To be able to do that and then go out and run a 4.33 (40-yard dash), that’s where it gets like, OK, is this guy from Krypton or is this guy from America?” Penn State strength and conditioning coach Dwight Galt said.

Penn State tight end Mike Gesicki had recently knocked Barkley off the broad-jump board with a leap of 10 feet, 11 inches.

“I haven’t got over that,” Barkley said.

Still, Barkley was feeling pretty good about eventually passing the 445-pound bench press of Austin Johnson, now a 315-pound nose tackle for the Tennessee Titans. Barkley’s lifting partner, fellow running back Andre Robinson, said trying to keep up with Barkley is great motivation, even if a little frustrating at times.

Robinson said thought he had a chance to beat Barkley this year on the bench, where Penn State players do as many repetitions of 225 pounds as possible.

“I beat him a couple of weeks, I’d do like one or two reps more than him. And then the last week of spring ball we tested and he did like six more than me out of the blue. Out of nowhere after I’d been doing just as many as him every week,” Robinson said. “It’s just crazy how he can turn the switch on and get things done.”

This all bodes well not just for No. 6 Penn State’s season, but for Barkley’s NFL draft status as elite running backs are finding themselves valued more of late. Dallas took Ezekiel Elliott fourth overall in 2016. This April, Fournette went No. 4 and Stanford’s Christian McCaffrey was picked eighth.

Penn State football: Koa Farmer in position to succeed at outside linebacker

Back in June, Galt and Penn State coach James Franklin had decided that Barkley’s one-rep power clean max of 390 pounds was good enough. There was no need to let him to do more even though he probably could. Barkley seemed cool with that.