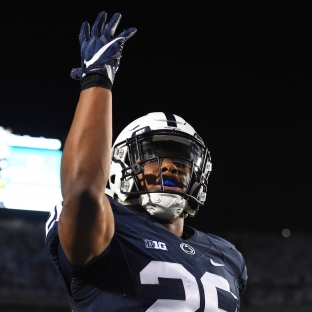 He walked off the field and did what he always does. Saquon Barkley sought out each of his starting offensive lineman, patted them on the back, and thanked them for opening up the holes he hit with enough speed and power to break a few more Penn State records on a soggy Saturday.

Asked about his own effort after the game, he said what he always says. Saquon Barkley credited everybody else. Those linemen. His surging quarterback, Trace McSorley, for making the right reads. His defense, for getting the other offense off the field so his could get back on. And, on Saturday, the seniors he said have been like big brothers over these last three trend-setting years.

But Barkley remained the only person in blue and white who acted like this was somehow just the same as every other game he has played at Beaver Stadium, like this was the beginning — and not the end.

College football: A full look at every undefeated team left in the country | Scores

On a day when the No. 10 Nittany Lions ushered out a transformative senior class with a roller coaster of a 56-44 win over Nebraska, guys like Marcus Allen and Grant Haley and Mike Gesicki and DaeSean Hamilton and Parker Cothren and Brendan Mahon weren’t the big story by the time it was all over. For them, that would have to be considered a shame if it weren’t so perfectly understandable.

While he wouldn’t directly admit it, and even as he tried valiantly to push the obvious questions aside for a few more weeks anyway, this one felt like Barkley at the finish line, saying so-long to Penn State fans even if he wasn’t blowing it goodbye kisses.

“I’m really, to be honest, not even focusing on the future right now,” Barkley tried to persuade the media horde gathered around him. “I’m excited we sent the seniors off on a great note with a win. … I haven’t made a decision yet. That’s something that, at the end of the season, I will sit down with my mother and my father and my family and really think about it.”

Big day for the seniors. @PennStateFball is 9-2! pic.twitter.com/wi4eXT0JOj

The problem making that sound believable for Barkley, who can decide to enter the NFL Draft once his junior season is in the rear-view mirror, was two-fold.

One, he recovered from a few weeks of struggles to author another of the virtuoso performances that have become his trademark. He rushed for a whopping 158 yards on 17 carries, scoring three touchdowns. He broke the Penn State career rushing touchdowns record that Lydell Mitchell grasped for decades. He broke the Penn State career receptions record Larry Johnson set 15 years ago. Those are long-held records by legends. He did a somersault into the end zone, even if he stepped out of bounds at the 1 a moment before he did it.

What other player in the country can you almost expect to see jump over a man, or somersault into the end zone, every game?

Two, his head coach didn’t do a great job hiding the fact that this could have been it.

James Franklin raved as much about Barkley the mature citizen and model student as he did the potential top-10 pick if he does decided to enter the Draft. He talked about how proud he is of his work ethic, of his determination to be the best running back he can be.

“I’m blessed to have coached him,” Franklin said.

That’s the past participle tense, as your third-grade English teacher probably taught you to pick up. Which led to a whole other line of questioning, and a stream of honesty from Franklin, who is savvy enough to understand that there is no reputational victory to be one in sounding like the head coach who doesn’t believe a player of this quality should pursue professional options.

He didn’t say as much, of course. Mostly because he can’t. It’s not his decision to announce, after all. But he conceded that he and Barkley chatted “before the season started” about the direction he believed his star pupil should take his future once the 2017 season ended.

“We had a long conversation,” Franklin said, adding again that he wouldn’t share the content of the talk. “What I try to do for all of my players is, give them advice I would give to my son. If I feel like they should come back to school to finish their degree and have an opportunity to go on and get one more season of development before going to the NFL, I tell them that. If I think they should leave early now, I tell them that as well.

The bottom line is, Barkley should leave. He is good enough. He has earned that. There’s no legitimate reason to stick around, as much as Penn State fans will miss his electricity, as much as coaches know that another run at the College Football Playoff in 2018 would be imminently more likely with him in the fold.

WATCH: Re-live every bit of action from Week 12

But he continued to try to push off the announcement, even if he hasn’t delayed the decision in his own mind. He said he got emotional once Saturday, when he looked around at teammates like Gesicki and Hamilton, Mahon and Allen, knowing that no matter what decision he makes, he’d never play another game here with them.

Wonder if his younger teammates had that same emotion Saturday when they thought of Barkley,

It will be a long time, after all, before someone comes through this place who changes the game the way he did. Or, maybe, any place.

This article is written by Donnie Collins from The Times-Tribune, Scranton, Pa. and was legally licensed via the Tribune Content Agency through the NewsCred publisher network. Please direct all licensing questions to legal@newscred.com.