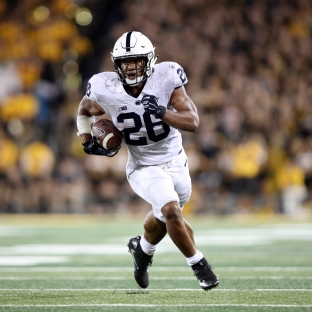 BLOOMINGTON, Ind. — Indiana gets a second chance to knock off a top-10 opponent.

“Going into Ohio State and game one, there were a lot of things you think are a certain way, a certain impression you have, and now you know,” Allen said. “We had questions about some positions.”

One question was answered this past Saturday when freshman tailback Morgan Ellison rushed for 186 yards in a 52-17 victory over Georgia Southern. Ellison has a team-leading 257 rushing yards and averages 5.8 yards a carry.

“We thought Morgan was a good a player and he’s proven he can be a very good running back at this level,” Allen said. “We are a much better team today because we have a better sense of who we are and what our strengths are. We know what to focus on. That gives you confidence.”

RELATED: A six-step guide to the 2017 College Football Playoff

That confidence jumped with a win at Virginia, a team that is now 3-1 with a victory at Boise State, and then again by dominating Georgia Southern with a rushing attack that had been missing the first two games.

This Saturday’s challenge at Penn State is much more formidable. Indiana is 0-9 at Beaver Stadium, and 1-19 against the Nittany Lions. The Hoosiers’ only win came in 2013.

The Generations of Greatness transformation is taking shape at Beaver Stadium.
#IUvsPSU pic.twitter.com/TY8kwweh8O

Allen said this is a tougher-minded Indiana team.

“I look at the way this team has prepared, focused and finished,” he said. “That wasn’t always the case around here. That’s a big step.”

The status is unknown for injured starters such as cornerbacks Rashard Fant and A’Shon Riggins and safety Marcelino Ball.

Notes: Ellison was named the Big Ten’s freshman of the week. Returner J-Shun Harris won his second Big Ten special teams player of the week honors. Harris returned a punt 70 yards for a touchdown against Georgia Southern. It was the second straight game he’d scored on a punt return. Only Rob Turner has done that in school history. Harris leads the Big Ten and ranks third nationally by averaging 26.1 yards per punt return.