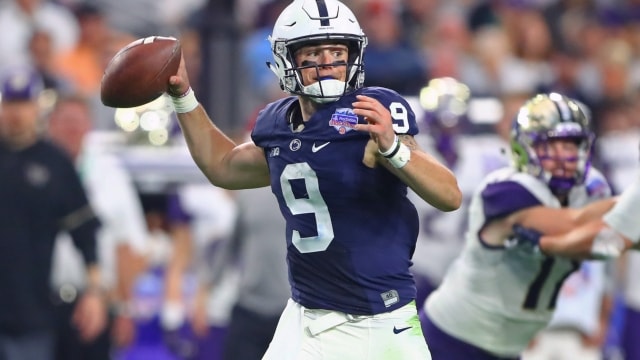 Penn State football: How Trace McSorley will have more freedom in the Nittany Lions' 2018 offense

The fifth-year starting quarterback, who graduated in May with a degree in accounting, will be around the Lasch Football Building more than ever before. He is taking a lighter class schedule and has a couple days off entirely, which was by design. McSorley is set for an expanded role when it comes to game planning — and Rahne is looking forward to the Heisman Trophy candidate’s input.

“Him being graduated, he probably has a little bit more time on his hands, right?” Rahne said with a smile at Saturday’s media day. “But no, I respect Trace, his football IQ, his football acumen and his ability to understand this offense and see things that can help us win football games.”

Now, this doesn’t mean McSorley is running the show. Rahne, Penn State’s first-year coordinator, is calling the plays, and that won’t change.

But McSorley is going to operate with a little more freedom. The quarterback said at Big Ten media days that more time at Lasch will allow him to process trends and tendencies faster. Then, he can go to Rahne with new ideas earlier in the week, and the coordinator will hear him out.

There’s a level of understanding between McSorley and Rahne that makes this situation work.

When the preseason Big Ten honoree was pegged by college coaches across the country as a safety, Rahne recruited him as a signal-caller, through and through. Ever since the spring of 2013, when McSorley — a rising senior at Briar Woods High School — impressed Rahne, who still worked at Vanderbilt, there has been a mutual bond. Penn State head coach James Franklin said the two have a “tremendous relationship.”

Of course, McSorley has given Rahne more than a few reasons to believe in him over the past couple seasons. Look no further than the quarterback’s 22-5 record as a starter, 8,268 total yards and 77 touchdowns.

With the experience he possesses, McSorley said having more latitude with game planning can help him, “take my game to the next level.” And his coaches are 100 percent behind him.

“He’s earned that right,” Rahne said. “There’s a difference between somebody being given something and somebody earning it. There are very few players in the country, I would say, who have earned it, not only by their play on the field, but their actions off the field and the work they put in.”

Added Franklin: “The thing about Trace that we love so much is that you know what you’re getting from Trace every single day. … I do think a lot of feedback in what he’s seeing on film in terms of how we build a plan, how we’re going to attack the opponent, how we’re going to attack the defense, I want those guys involved as much as we possibly can.”

This article is written by John McGonigal from Centre Daily Times and was legally licensed via the Tribune Content Agency through the NewsCred publisher network. Please direct all licensing questions to legal@newscred.com.