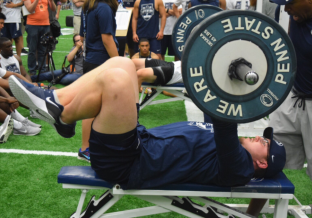 Saquon Barkley stood up from the black flat bench to thunderous applause echoing throughout Holuba Hall.

Fans whistled. Penn State’s strength staff clapped. Teammates made, “3-0,” with their fingers on Saturday afternoon at the 15th annual Lift for Life.

Barkley cranked out 30 reps of 225 pounds on the bench press, tying the best mark for a running back at this year’s NFL Combine.

Although he was promptly outdone by offensive lineman Steven Gonzalez’s 38 reps, Barkley loved the atmosphere — and the cause that brought him and the Nittany Lions to Holuba.

“You come together and put on a show for the fans and families. It’s a special event,” Barkley said. “I’m so happy to be at a place like Penn State that does stuff like this.”

Lift for Life featured the Penn State offense and defense facing off in a series of competitions — bench press, tug of war, tire races, just to name a few — to benefit the rare disease community through Uplifting Athletes.

Uplifting Athletes has raised nearly $1.2 million for cancer research and the rare disease community since 2003, although Saturday’s total has not yet been announced by Penn State.

“Steve’s done a really, really nice job,” Galt said. “He and Colin Castagna have been our two strongest guys in the bench press. Then someone who really kind of snuck up on us was Saquon.”

Barkley’s 30 reps on the bench tied former Oklahoma tailback Samaje Perine’s mark at this past year’s pre-draft combine in Indianapolis — a profound achievement for a rising junior.

He did it with the cause in-mind, too, as did the rest of his teammates.

MORE: What did SEC coaches say at 2017 Media Days?

“Now, it’s grown into a huge philanthropy, and they’re doing such a great job,” Nelson said. “…We hope every year it just gets bigger and bigger, and we can make a difference in the rare disease community.

“All the stories of people hearing, ‘There’s nothing we can do for you,’ that just breaks your heart as a human being. That still goes on, so just to give back to such a great cause, to continue the tradition of Uplifting Athletes and Lift For Life here at Penn State, and grow this chapter, means a lot to the players.”

This article is written by John McGonigal from Centre Daily Times and was legally licensed via the Tribune Content Agency through the NewsCred publisher network. Please direct all licensing questions to legal@newscred.com.