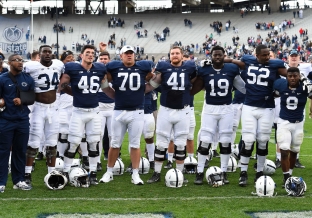 Penn State’s football freshmen met with some of their elders last Friday for a Q&A about what awaits them. No coaches, administrators, faculty or staff members. Just players talking to players.

The meeting marked another stage of ownership the Lions are taking of their 2017 football season, for which training camp begins in two weeks. In that session, the freshmen asked some raw, personal questions, offensive lineman Andrew Nelson said. And the veterans provided equally raw, personal answers “which will stay in that room.”

“A team really becomes special when the coaches don’t even really have to coach anymore,” Nelson said. “When the players take the team over and the players become leaders and the players dictate and drive that culture of excellence.”

Penn State is about to begin its most anticipated season since the late 1990s, when the team held preseason rankings of No. 1 (1997) and No. 3 (1999). With the Big Ten championship trophy shining in the football building’s lobby, and most of the roster back to defend it, Penn State carries anticipation into 2017 not seen in 20 years.

The Lions have not been ranked in the Associated Press preseason Top 25 poll since 2010 (No. 17). They also haven’t had a player generate the amount of summer excitement that Saquon Barkley has since LaVar Arrington appeared on the cover of Sports Illustrated in 1999.

As a result, players said at the Lift For Life fundraising event last weekend, this summer has been different. They have taken more ownership of their offseason workouts (within the strength staff’s direction, of course) and more control of their team-building exercises.

ICYMI: See how Penn State Football is working to make a difference in the community with the annual Lift for Life event. #WeAre pic.twitter.com/cSnfSSaWrm

Barkley, the Heisman Trophy candidate at running back, has challenged teammates for not touching end lines during sprints. Quarterback Trace McSorley, another Heisman candidate, has watched film of the 2017 defensive opponents.

Every Monday and Wednesday, skill players gathered for 7-on-7 sessions, and linemen drilled indoors. Barkley, McSorley, Nelson and captain Jason Cabinda gathered players to make sure they understand that a Big Ten title defense will be much different than 2016’s surprise win.

“Last year, Penn State was that team like, ‘Wow, we just got beat by Penn State. How did that happen?'” said Nelson, a fifth-year senior. “Whereas this year, Penn State is going to have a target on our back. We’re not creeping up on people anymore.”

RELATED: 50 storylines ahead of the 2017 college football season

Penn State occupied a different spot last year, when three consecutive seven-win seasons (two under coach James Franklin) didn’t signal high expectations. But Franklin noticed a growing team chemistry taking place. The roster had stabilized, as a majority of the players were recruited by Franklin and his staff.

Those players received a singular message, belonging to Franklin, through their recruiting and playing days. They had not endured the staff changes and tumult of the sanction years. Franklin has noted that the “buy-in” among players, in part, led to the remarkable nine-game winning streak and first Big Ten championship since 2008.

“He came in here with a mindset of building the program, getting this culture back to the way it was, and I think he’s done a phenomenal job,” senior tight end Mike Gesicki said. “We all bought into Coach Franklin and his scheme and his mindset and what he preaches to us each and every day. Once you finally got a full team to buy into that, you saw the on-field product last season.”

One change that carried over was discussing that mindset aloud. Former linebacker Nyeem Wartman-White spoke up in a team meeting last summer, asking why the players didn’t openly talk about winning a Big Ten championship.

Wartman-White changed that, encouraging teammates to voice their goals aloud. During training camp last year, the Lions passed a photo of the Big Ten championship trophy daily. And Wartman-White, though he sustained a knee injury early in the season, celebrated the championship as much as anyone in Indianapolis.

This year’s motivator is the College Football Playoff, which Penn State missed by one spot last year. Receiver DaeSean Hamilton, who needs 19 catches to break Deon Butler’s career record, called the playoff a tangible goal. Cabinda said he has never seen this much confidence at Penn State, primarily because the team has “a lot of dudes who can play.”

“We’re setting our goals on the Big Ten and national championship, and then we’re going to put that in the back of our minds and we’re going to take it day by day, focusing on what it takes that day to reach our goals,” Nelson said. “These guys are more motivated than I’ve ever seen at Penn State. Guys aren’t settling for anything less than a shot at a national championship.”

This article is written by Mark Wogenrich from The Morning Call and was legally licensed via the Tribune Content Agency through the NewsCred publisher network. Please direct all licensing questions to legal@newscred.com.