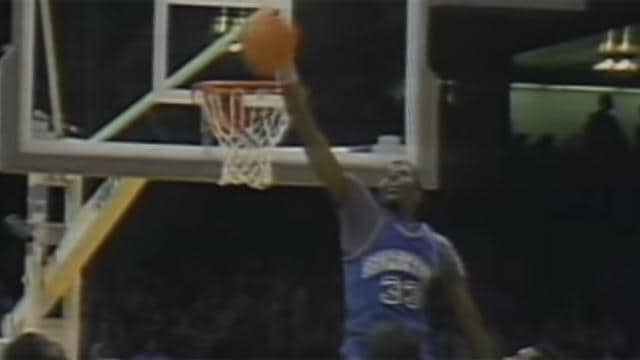 
Patrick Ewing, the current men’s basketball coach at his alma mater Georgetown, was one of the greatest college basketball players ever. A dominant low-post force who played for the Hoyas for all four years of college, Ewing led Georgetown to the national championship game in the NCAA tournament three times.

Here’s everything you need to know about Patrick Ewing’s college career with Georgetown.

How many years did Patrick Ewing play in college?

Ewing played college basketball for four seasons, starting in the 1981-82 season. He last played in the 1984-85 season.

What was Patrick Ewing’s record in college?

What kind of prospect was Patrick Ewing coming out of high school?

He was an All-American and The Washington Post reported he was the most sought-after player in his class.

“Every now and then, there is one of them in high school basketball, a large athlete whose talent seems to be singular,” wrote The Akron Beacon Journal‘s Tom Melody in April 1981. “In years gone by, there were Wilt Chamberlain and Lew Alcindor and Bill Walton and Ralph Sampson. Now there is Patrick Ewing. He is approximately seven feet tall, elegantly agile.”

How many national championships did Patrick Ewing win in college?

As a lean 7-footer, Ewing immediately had an incredible defensive prowess at the college level, earning Big East Defensive Player of the Year honors in four consecutive years. Ewing helped Georgetown limit opponents to 39 percent shooting in the 1983-84 season. In fact, opponents never shot better than 43 percent in a season against Ewing’s Hoyas.

In the 1982 national championship game during Ewing’s freshman year, he was called for goal-tending multiple times in the opening minutes as he tried to set the tone defensively and make North Carolina think twice before shooting with Ewing around.

Offensively, the 7-footer’s game grew as he spent more time at Georgetown, with him leading the Hoyas in scoring as a sophomore (17.0 points per game), junior (16.4 points per game) and senior (14.6 points per game). These were talented Georgetown teams, too. He was one of four future NBA players on the Hoyas’ 1982 squad, one of five in his next three seasons.

One of Ewing’s greatest strengths on offense was an ability that couldn’t necessary be measured with statistics: the defensive gravity that he drew, which opened up driving lines and shots for his talented teammates.

“Just having Patrick standing inside has opened things up from 17 to 20 feet for us this year,” teammate Eric “Sleepy” Floyd said in March 1982. “Patrick will get a dunk early in the game and everyone will sag back in on him the rest of the night.”

A 1983-84 season preview in the Asbury Park Press (Asbury, New Jersey) noted that as long as Ewing is double, triple and quadruple-teamed by opponents, he’ll continue finding open teammates. “He’s mature enough not to force shots when he’s got two or three men hanging all over him,” Georgetown coach John Thompson told the paper.

RELATED: The complete results from the best #MarchMadnessMoments bracket

What were some of Patrick Ewing’s best games?

Patrick Ewing scored in double figures in 15 of his 18 NCAA tournament games so when the lights were the brightest, he was usually at his best. His best statistical performance was a 21-point, 14-rebound, five-block game against Loyola Chicago in the Sweet 16 in 1985, which was just one of his four NCAA tournament double-doubles.

Even though Georgetown lost the 1982 national championship game, Ewing played his heart out. He was the only player to finish with a double-double (23 points and 11 rebounds) as he made 10-of-15 attempts from the field, all three of his free throws and grabbed two more rebounds (11) than the rest of his teammates combined (nine).

You can watch a full replay of the game below.

Ewing was a rebound shy of a double-double in the 1984 national championship game, which the Hoyas won, with 10 points and nine rebounds, plus three assists, in an 84-75 victory.

What awards did Patrick Ewing win in college?

Here are some of the notable accolades that Patrick Ewing received at Georgetown.

What records did Patrick Ewing set in college and where does he rank among historical greats?

Here are some of the records and all-time rankings that Patrick Ewing accumulated at Georgetown.

What did people say about Patrick Ewing?

Former Georgetown coach John Thompson kept Ewing sheltered from the media so many of the descriptions of the former Georgetown 7-footer come from his former coaches and teammates, opponents and journalists who chronicled his college career.

Former high school coach Mike Jarvis: “I used to keep talking about Russell to him. He never had heard of him and used to look at me like I was crazy, but he listened.”

Former Georgetown coach John Thompson after Ewing committed to Georgetown: “There’s pressure on a coach when he starts five untested freshmen, and there’s pressure when you have great players. I prefer more pressures like Patrick Ewing.”

Thompson: “There are a lot of players in basketball who can run but won’t run, who can jump but won’t jump. Patrick is capable of running and will run, capable of jumping and will jump. I think the one ingredient [Ralph Sampson] has that I haven’t seen is [Ewing’s] level of intensity. Patrick is willing to to put forth the energy to do what he has to do; few athletes do that.”

Thompson: “Patrick is definitely a warrior. But his fierce attitude has been projected all out of proportion to his personality. He just isn’t very subtle. He’ll come out and glare at you at the start of a game. He wants you to know right away that it’s his domain inside. He’s not trying to intimidate. It’s his competitive honesty.”

Boston College coach Tom Davis, whose school was one of six finalists for Ewing: “Sure I’m disappointed, but our season tickets should go up just from having him in the Big East.”

St. John’s coach Lou Carnesecca: “It’s great having Patrick in our conference. Every team that plays him should benefit.”

The Boston Globe‘s Michael Madden prior to the Georgetown-Virginia matchup in 1982: “Let’s not be coy. This is The Duel in college basketball, The Duel of this decade, The Duel of the last decade and perhaps The Duel of all the duels since Elvin Hayes and Lew Alcindor filled the Houston Astrodome in 1968 … But now we’re more wise enough to know this is a jewel of a duel. And if the two giants grow into their roles, this could be perhaps The Duel of the future, 10 or 15 more years of jousts whose eventual winner could be set in stone and bronzed tonight. Patrick Ewing of Georgetown and Ralph Sampson of Virginia will meet tonight on a basketball court for the first time, and who wins likely will be winning years from now in the NBA. It’s one of those rare moments, a game in which the future may be now.”

The Salt Lake Tribune‘s Roger Graves: “Basketball fanatics in the nation’s capital are already dreaming up clever nicknames for Georgetown’s 7-foot freshman center Patrick Ewing. They’re calling Ewing the Secretary of Defense and the Washington Monument, and he’s almost as popular as the Lincoln Memorial and Ronald Reagan himself.”

Providence Journal‘s Bill Reynolds: “This was not another gentle giant. This was a warrior. He was the first super-talented big man with a mean streak, which earned him the description as the Darth Vader of college basketball.”