OMAHA, Neb. — Each year at TD Ameritrade Park Omaha, our NCAA.com College World Series team searches the many unique food stands for the best menu items offered. You saw our 2018 reviews, but it’s a new year, and that means new items.

One pound of diced potatoes bunched into one gigantic tater tot. It’s neither easy to find, and when you do, there’s no guarantee you’ll get your hands on one.

“They go pretty fast,” Levy’s Executive Sous Chef Chris Myers told us in an exclusive interview. “I walked by yesterday and the first game hadn’t started yet and we were down to 14. If you’re not here before the game starts, you probably won’t get one.”

Levy has become known for its sometimes wacky menus both here and across the street at the CHI Health Center. Chef Chris’ love of baseball and the fun side of food is what drew him to the company a year and a half ago as part of the team that created this monster tot.

“Trying to figure out how to make another loaded tot,” Myers said of the creative process. “In the process of that, we decided to not do what everybody else does but still have a tater tot. So, let’s just make a giant tater tot.” 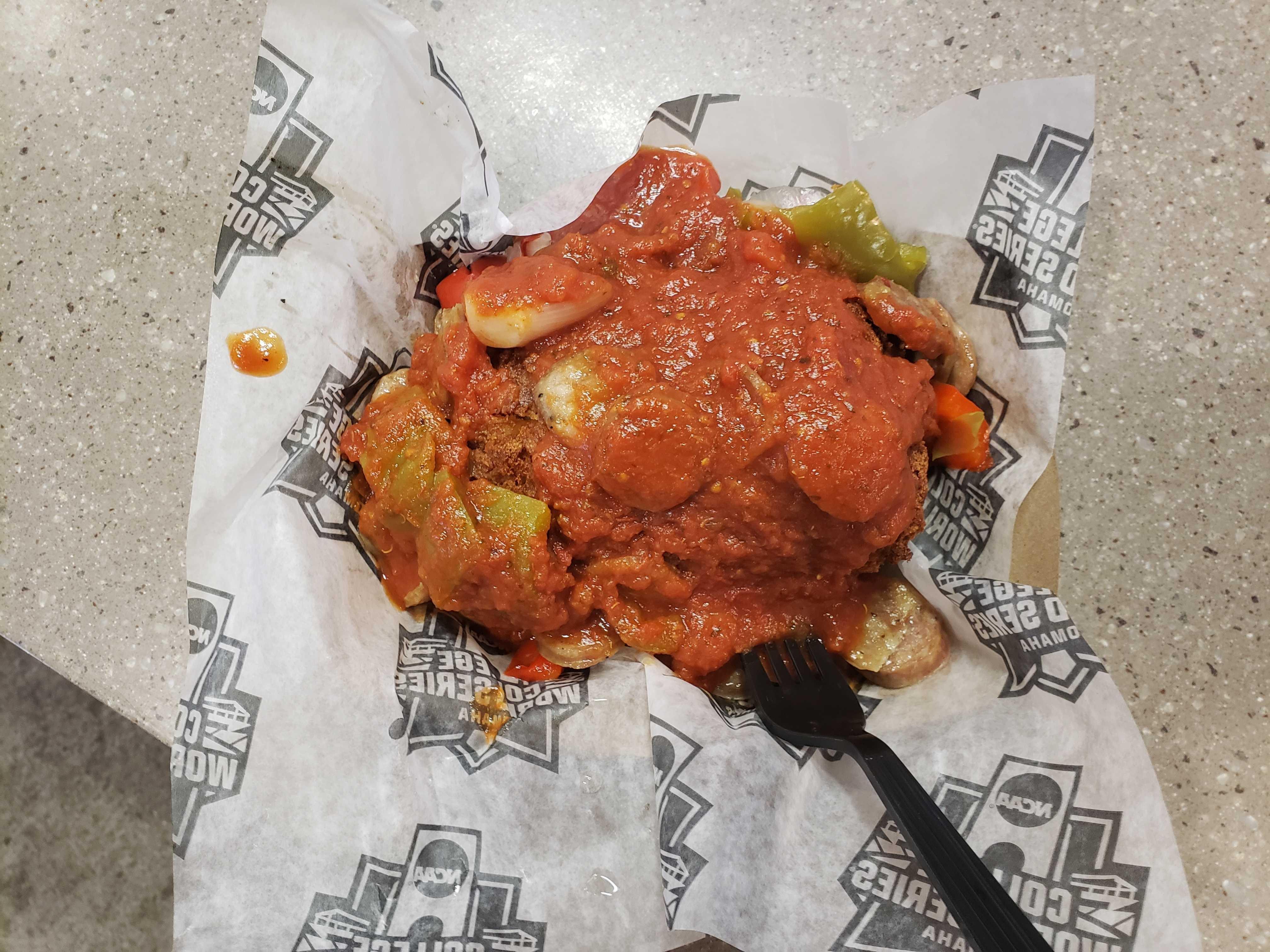 It’s not an easy process, and much of it has to be done beforehand.

“We dice potatoes, flash fry them real quick, and while they are hot we run them through a buffalo chopper,” Myers explained. “It’s like a giant food processor. Then, while they are still warm we form them and wrap them in saran wrap and get them in the cooler.

“They’re frozen until we need them. They fry them at the concession stand and hold them hot. And there’s only 50, so once they’re out, they’re out.”

That’s right. They put a count on them, 50 each game, which means 100 a day with doubleheaders. And when they’re gone, they’re gone. A digital countdown clock actually rests on the back wall of the concession stand, with a word to the wise: Get one before they’re gone!

We were lucky to order two with ’22’ still on the counter. By the time we received our orders, it was down to 17.

“The process is a little bit laborious,” Myers said. “We were going to just sell them, but when we tested them before the series last year, we knew there was no way we were going to keep up with these. So, we do 50 and have the countdown and make it kind of fun.”

There are three flavors to try. The chili & cheese and buffalo & blue cheese are holdovers from last year, and the new Italian — which blends marinara, sausage, peppers and onions — replaces the poutine option from last year.

We tried the buffalo and Italian styles. If you are a fan of the tater tot, it’s pretty much your dream concoction. You get a healthy (probably not the best word) dose of buffalo sauce that’s right between medium and hot spice, and they aren’t shy on the blue cheese topping it off with the perfect amount of green onions. The Italian style comes with a hearty offering of sliced sausages that, mixed with a full pound of potato, will keep you full for the rest of the day.

So, what else was on the menu?

“The pork burger,” Myers quickly rattled off his favorite item sold at the ballpark. “Pretzel buns are the best. We also tried fried apples because most come with fried onions.” 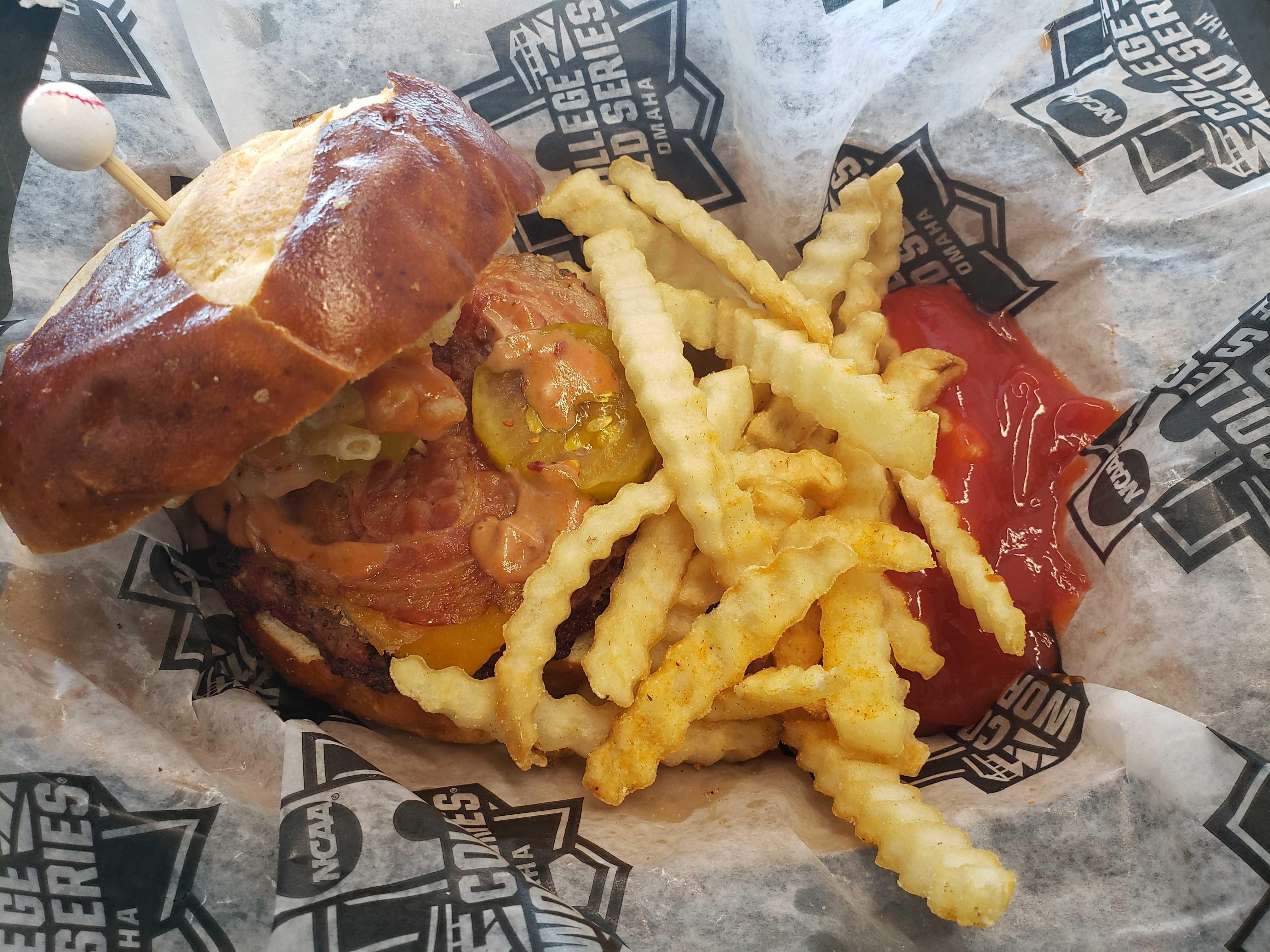 The Rosemary & Apple Pork Burger at the College World Series.

The fried apple topping is a nice touch, and a great alternative to onions. It gives the meal a subtle sweetness to go along with the savory patty burger. The pretzel brioche bun brings the whole burger together, just as Myers promised. You get three tacos stuffed to the, well, tortilla end, with chicken tinga or baja beef. Pick your toppings. We decided to go with them all: lettuce, sour cream, jalapenos, cheese and your choice of red or green salsa. It gets a little messy, but it’s well worth it.

Is the hot dog a sandwich? This brand-new meal is a nice compromise for the age-old debate. “Of course it is,” Chef Chris said. “We’ve already proved it.”

The Hot Dawg Sandwich is a jumbo dog with a fresh slice of provolone, shredded lettuce, tomato and topped with herb aioli, bacon bits and a pickle. It’s basically a BLT with a hot dog at the center. This is the perfect option for those looking to stay true to a classic ballpark tradition, but with a deli twist.

The name alone makes this one worth a try. Featuring “spicy lightning cheese,” frazzled onions for a nice crunch, ketchup and habanero relish, this hot dog packs a real punch. Some advice: Make sure you keep a cold beverage nearby to counter the strong aftertaste zing.

The Nachomaha at the College World Series. 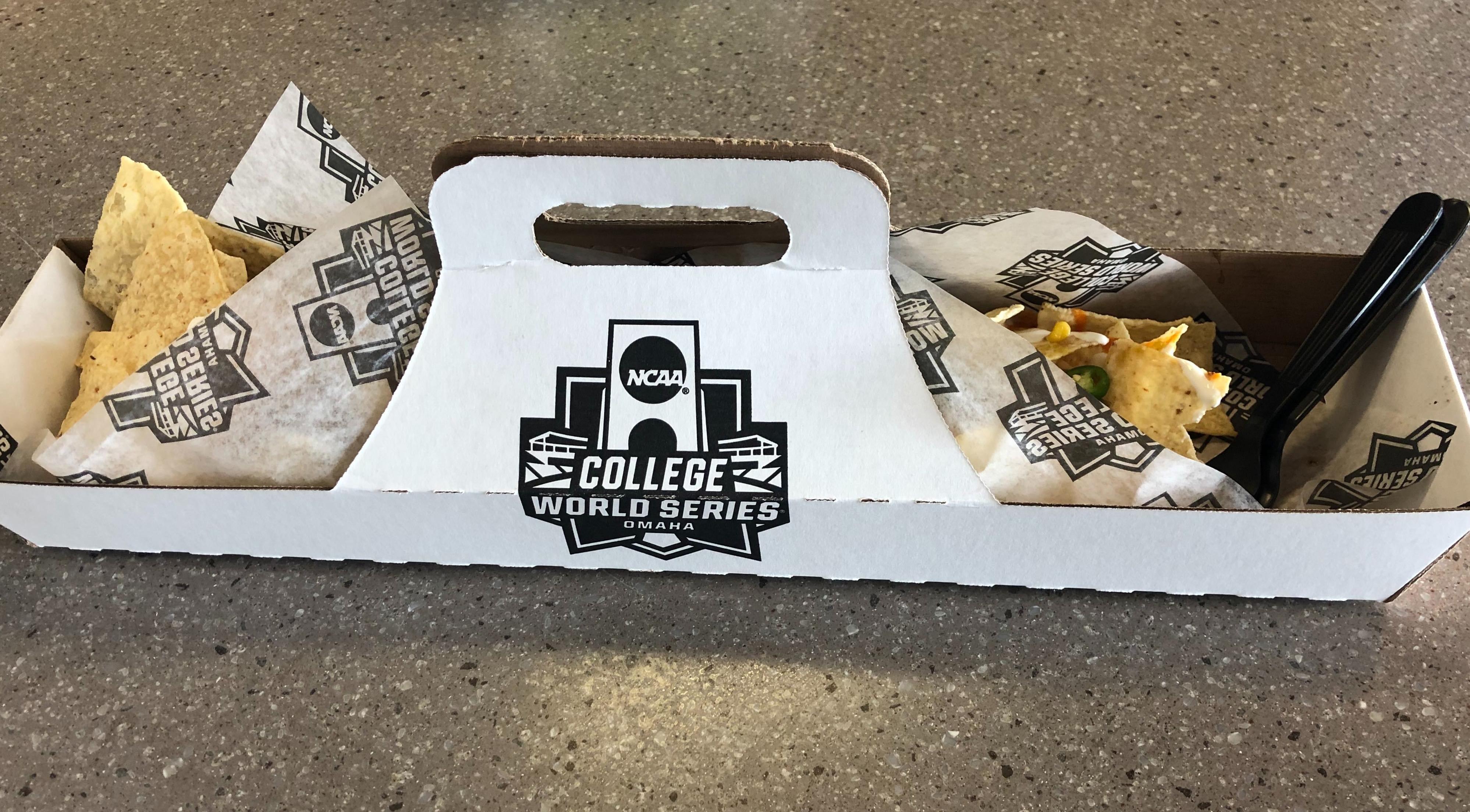 These bad boys are so big, you get them in a carrying case. They come topped with Omaha steak and loaded with just about everything you’d expect nachos to have from jalapenos to sour cream to a tasty corn salsa. It’s a monster, you may not want to go at it alone, which is probably why they load you up with two forks at the counter. 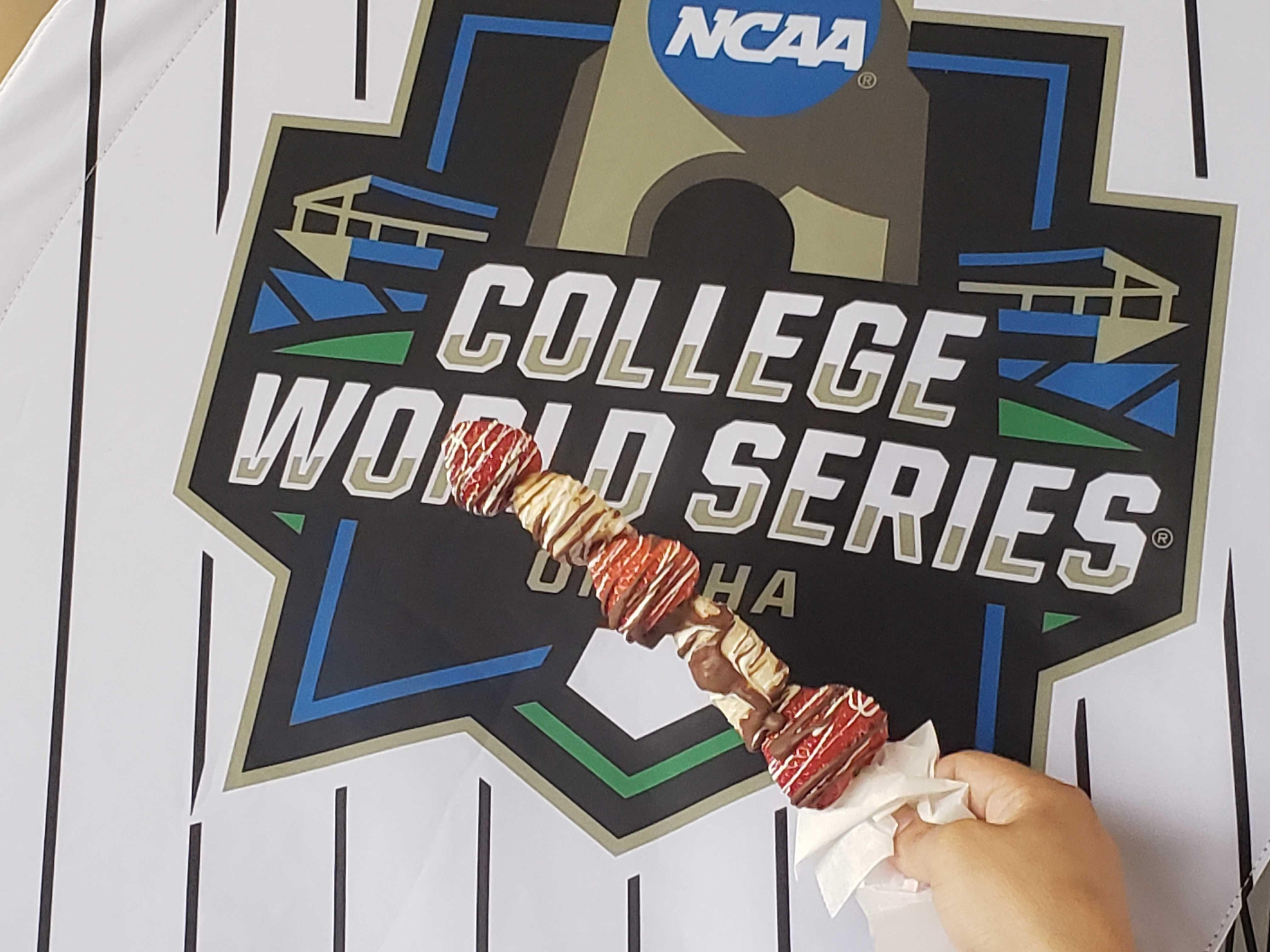 This has become as much a TD Ameritrade staple as the hot dog. And it’s probably the healthiest choice on the menu, kind of. It’s cool and refreshing and you get your choice of strawberries and bananas or strawberries and brownies, both drizzled in white and regular chocolate.