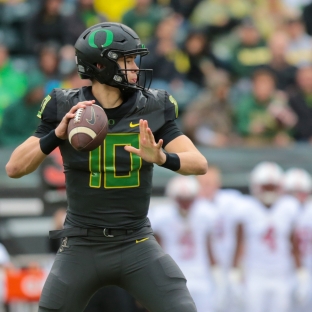 EUGENE, Ore. — Oregon quarterback Justin Herbert had what was essentially a two-pronged approach to the offseason: Become stronger and become a leader.

Herbert put on muscle, prompting Ducks first-year coach Willie Taggart to joke that the sophomore signal-caller kept strutting around shirtless. Herbert worked on the leadership part, too, as a counselor at the Manning camp in Louisiana.

“I’ve seen Justin grow a lot. I mean, he’s giving off a lot of confidence, especially to the other players, to show he’s that guy,” running back Royce Freeman said. “We’re definitely following behind him and we trust him fully.”

Thrust into a role as Oregon’s starting quarterback as a freshman last season when graduate transfer Dakota Prukop struggled, Herbert would go on to play in nine games, throwing for 1,936 yards with 19 touchdowns.

Herbert goes into this season knowing he’s the starter. The Ducks open at home on Saturday afternoon against Southern Utah.

It will be the Oregon debut for Taggart, who is looking to rebuild a team that went 4-8 overall for the Ducks’ first losing season since 2004.

Taggart comes to Eugene after four years at South Florida, where he guided the Bulls from a 2-10 record his first year to a 10-2 mark last year and a spot in the Birmingham Bowl. Before that he spent three seasons at his alma mater, Western Kentucky, inheriting a winless program that he turned around with back-to-back winning seasons.

Known for being soft-spoken and shy, Herbert said he’s talked with his new head coach about what it means to be a leader.

“I think just realizing that the quarterback has to step up. The team needs to be led,” Herbert said. “Coach Taggart and I have talked about how I need to step up and be more vocal for the betterment of the team. So I’ve put my shyness away and I’ve tried to come out a little more and talk.”

Herbert understands that his introverted approach last season may have hindered the Ducks.

“Last year I think I didn’t do a good job of being vocal or talking very much. So I think it kind of hurt us from a strategy standpoint. I didn’t have the comfortability to go to the offensive linemen or the running backs or the receivers,” Herbert said. “But I think just being more comfortable around them has been super helpful.”

Part of his transformation was the result of the time he spent this summer at the Manning Passing Academy. Among his fellow counselors were USC’s Sam Darnold and Washington’s Jake Browning.

Herbert also bulked up over the summer, putting on some 15 pounds, and his arms are noticeably bigger. His new 6-foot-6 body prompted a bit of good-natured chiding from the team.

“He’s gained about 15 pounds since last year, and Justin’s walking outside with his shirt off now. And if you all know Justin, that wasn’t him before. But he’s laughing. He’s hanging out with his guys,” Taggart said.

What’s it mean to be a mentor for @CoachTaggart? #Pac12FB

Freeman joked: “We’re trying to beg him, ‘Just please put your shirt on.'”

Herbert, who sheepishly said his physique has “been exaggerated a little bit,” is more focused on the process. The Ducks are expected to have a transition season as Taggart installs his system: Oregon was selected to finish fourth in the Pac-12 North.

Herbert believes the future is bright.

“We just have to listen to the guys who have been there. We’ve got multiple guys on our team who have been in a national championship and have played there. We’ve got coaches who’ve coached in big games and they know what it takes. And the players do, too,” he said. “I think just listening to them and following the game plan will get us there.”