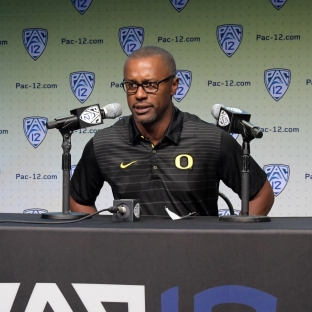 EUGENE, Ore. — There is much talk about a culture change at Oregon, and it seems as if the players are taking it to heart.

Quarterback Justin Herbert was thrown into the starter’s role last season as a shy freshman. He’s since put 15 pounds on his lanky 6-foot-6 frame and new coach Willie Taggart joked that he’s been strutting around without a shirt on.

Then there’s running back Royce Freeman, already a physical force, who Taggart said has changed both his attitude and his approach.

Taggart is about to embark on his first season as Oregon’s head coach and he’s pleased with the attitude shift he’s seen in his players since his arrival. Fall camp opens on Monday and the work begins in earnest.

“It’s go time. The honeymoon is over,” Taggart said Sunday. “We are ready to roll.”

Just two seasons after playing in the first College Football Playoff championship game, the Ducks’ run of 11-straight winning seasons ended with a thud — a 34-24 loss to the rival Oregon State Beavers. Oregon finished 4-8 overall and at the bottom of the Pac-12 North standings at 2-7.

Three days after the season the Ducks dismissed Mark Helfrich.

Taggart’s last two head coaching jobs have also been rebuilding projects. He was coach at South Florida for the past four seasons, guiding the team from a 2-10 record his first year to a 10-2 mark and a spot in the Birmingham Bowl last season.

“Anytime you come into a new program, changing the culture is probably the biggest thing and the hardest thing to do because they have been doing it a certain way for a while,” he said.

The transition hasn’t always been smooth.

Herbert and Freeman will be key to his offense — which Herbert vowed will be even faster than Oregon’s speedy “blur” offense that pushed the Ducks onto the national stage under coach Chip Kelly.

“We’re going to try and go even faster this year,” Herbert said at the conference media day this week. “The emphasis is on going fast. We’ve got so many guys to make plays, and my job is to distribute the ball.”

Herbert threw for 1,936 yards and 19 touchdowns in eight games as a freshman last season, taking over when graduate transfer Dakota Prukop struggled.

“He’s gained about 15 pounds since last year, and Justin’s walking outside with his shirt off now. And if you all know Justin, that wasn’t him before. But he’s laughing. He’s hanging out with his guys,” Taggart said.

Freeman joked on Sunday: “We’re trying to beg him, ‘Just please put your shirt on.'”

Annual Oregon Media Day is a wrap. Next up, first practice of camp in the a.m. #GoDucks #DoSomething pic.twitter.com/II1QX2lZBb

Freeman was the Ducks’ leading rusher last season with 945 yards in 11 games, but he was hampered by injury. He has rushed for 4,146 yards over three seasons with the Ducks, second only to LaMichael James (5,082 yards) on Oregon’s career rushing list.

“I told him to tell me when he doesn’t want any more carries,” Taggart said. “I’ll just keep giving them to him.”