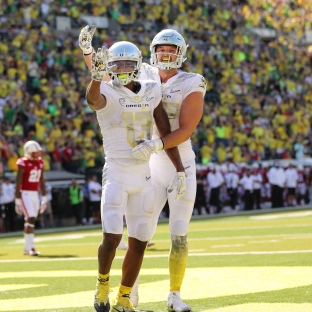 If you watch Oregon play Nebraska on Saturday afternoon, you’ll notice the Ducks’ shiny silver, chrome helmets, yellow outlines around their numbers, and yellow socks. Oregon is no stranger to sporting a seemingly infinite number of uniform combinations, the team’s latest has a unique, and inspiring, origin story.

That’s because a trio of cancer survivors who have received treatment from the OHSU Doernbecher Children’s Hospital in Portland, Ore., helped design the Ducks’ Nike Vapor Untouchable Performance System uniforms.

RELATED: What to watch in a loaded college football weekend

The uniforms were designed with companion sneakers, which were made available Sept. 4, and all proceeds will go to a pediatric cancer fund at OHSU Doernbecher Children’s Hospital.

You can see the unifoirms below:

More than a game when @OregonFootball takes on Nebraska in Week 2. Win the fight. #StompOutCancer. pic.twitter.com/aSuI57wiby

At halftime, the Oregon Duck mascot went to midfield, where he crushed the word “Cancer.” You can watch below.