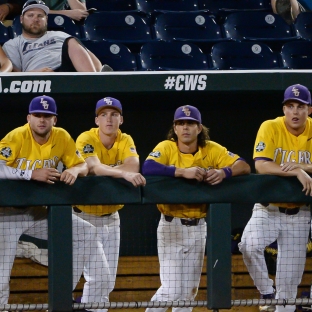 OMAHA, Neb. – Paging Warren Morris. Please send any leftover LSU karma you might have from 1996 to Omaha. Urgent.

Warren Morris? He’s college baseball’s Joe Carter and Bill Mazeroski — the only man to ever win a College World Series championship game with a walk-off homer. His two-run, two-out lightning bolt in the bottom of the ninth inning in ’96 gave LSU a 9-8 victory over Miami, and made him a Tiger legend from here to eternity. The second baseman was hitting ninth in the lineup, had missed 39 games with a broken bone in his hand, and didn’t have a home run all season.

That’s magic. And magic is what LSU needs Wednesday night in the elimination game against Florida State, or it’s time to catch the flight back to Baton Rouge. No team in Omaha this week had its psyche battered worse than the Tigers, when they put their 17-game winning streak on the line and had Oregon State stomp on it 13-1.

Oh, they could use a little Warren Morris about now, all right. Speak of the Tiger, here he is.

“That wasn’t our best game. That happens,” Morris said over the phone from his home back in Alexandria, La. “They’re a resilient bunch. All you can do now is take it one game at a time.”

The College World Series is rolling and LSU is in it. Can’t help but bring June 8, 1996, back to Morris.

“It still feels like it was yesterday to me. It’s hard to believe it’s been 21 years,” he said. “Probably a week doesn’t go by that somebody doesn’t stop me and tell me about watching that game, or where they were. That to me is the best part about the whole deal, over the 21 years getting to meet the people, they come up and tell me their stories and how happy they were.”

He’s not kidding. Listen to this conversation Monday in a TD Ameritrade parking lot between a couple of LSU tailgaters, who were waiting for the ill-fated game with Oregon State.

“That’s my birthday, too,”  Brad Parker completed the sentence. “I share my birthday with the greatest LSU baseball day in history.”

Morris answers that story with one of his own. A teammate was married on June 8. “He always sends me an email. `Happy anniversary. and it’s my wedding anniversary, too.”’

LSU and Florida State will square off for the second time in the CWS Wednesday at 6 p.m. CT.

“I just had this strong sense that we were a team of a destiny, that somehow we were going to find a way. I never dreamed it would be me hitting a home run. I can still see Tim Lanier as he was walking back to the dugout (after striking out), telling me `pick me up.’ And just thinking, `this isn’t just about me, it’s about all of us.’”

“Once that ball left my bat it was like super-speed motion. Before I knew it, I was on the bottom of a pile at home plate.”

An Omaha man sitting in the right field bleachers got the ball, and had enough of a sense of history to search out Morris and give it to him. “I have it in a special place. It’s not something I look at all the time, but I love the fact that I still have it,” he said. “My one memento. I guess me and that ball have a special part in sports history for that one day.”

Carter and Mazeroski would understand. They’re the only major leaguers to ever end the World Series with homers. Morris has never met Carter, but when he was playing with Pittsburgh during his five-year big league career, he had a chance to sit down and share stories with Mazeroski, who was in the Pirates front office. It is a conversation he cherishes.

Morris hit 26 home runs in the majors, but none of them made a dent in the consciousness of most folks back home. “They don’t really care about that. It’s always, `There’s Warren, the guy that hit the walk-off home run for LSU.’”

Bottom line, one swing in Omaha changed his life.

“I’d like to think it didn’t change who I am. But it definitely changed what people remember me for. I always think of the fact that some people unfortunately are remembered for the ball going through their legs, or not making the play. If I can be remembered for one thing as great as that, I’m good with it.”

He’s a banker now in Alexandria. A father, a husband, and an LSU fan. The man whose home run lives forever in Louisiana will be watching Wednesday night.

We’ve reset and our focus is on Florida State. It will be Tigers vs. Seminoles at 6 p.m. Wednesday on ESPN. pic.twitter.com/PyEWwV82kQ