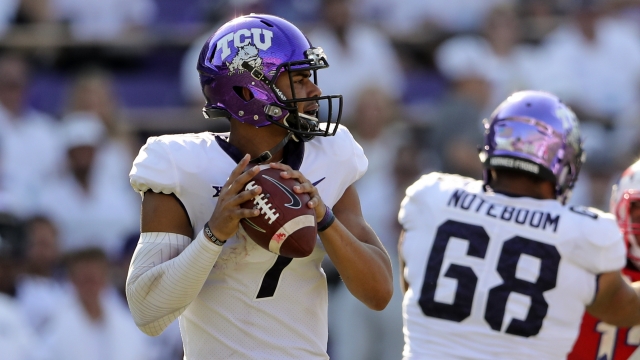 Now, the Cowboys face their first major test as they open Big 12 play. Sixth-ranked Oklahoma State will host No. 16 TCU on Saturday in a game that could affect the national championship race.

Oklahoma State ranks third nationally in total offense with 607 yards per game, and fourth in scoring offense with 54 points per contest. Rudolph ranks among the nation’s leaders in passing yardage and efficiency, and James Washington is near the top for yards receiving.

Rudolph knows he’s in for a challenge. TCU ranks 15th nationally in total defense and 14th in scoring defense. The Horned Frogs beat Jackson State 63-0 and Arkansas 28-7, then their defense tightened up after a rough start to beat SMU 56-36 .

RELATED: What to watch in Week 4 | Scoreboard | TV schedule

“I think it’s the best group that we’ve played up to this point,” Gundy said. “They’re always going to challenge you. TCU is going to hold its defensive call until the last second and they’re going to run with you. They recruit well. Their guys can tackle and move well, so it’ll be a challenge for all of us. It’ll be a good game.”

TCU coach Gary Patterson calls Oklahoma State “one of the best teams playing so far” in college football. The Horned Frogs have embraced their underdog status.

“It’s just you against the world,” Texada said. “No one believes in you, you’ve just got to — like we say, just take it one game at a time and it will work itself out.”

Here are five things to watch as Oklahoma State tries to establish itself as one of the elite teams in college football and TCU tries to work its way back into the conversation.

Seven Cowboys caught the ball on Saturday, four had 100+ yds on the day. #Okstate is WIDE RECEIVER U!! #GoPokes #CowboyUp18 #CowboyUp19 pic.twitter.com/tKl79tDvJL

TURPIN TIME: TCU receiver KaVontae Turpin went without a catch the first game of the season but has 12 the past two games combined. He went over the 1,000-yard mark for his career last week against SMU. He needs 68 yards to reach 3,000 all-purpose yards for his career.

“You have to teach it, coach it, stress it and make them hungry for it every snap,” defensive coordinator Glenn Spencer said. “It’s barking and screaming at them to knock the ball out, to strip it. It’s pursuit angles. How many turnovers are created by great pursuit angles? How do we coach it? We coach it like that.”

HILL THRILLS: TCU quarterback Kenny Hill has completed 75 percent of his passes this season, and he is on pace to set a school record. He leads a TCU offense that ranks seventh nationally in scoring offense and 19th in total offense.

“He’s a great athlete, and I think he has a better team around him as well this year, so he’ll be a pretty good challenge,” Phillips said. “He can throw the ball and he can run so it makes it a little harder for a defense to scheme against him.”