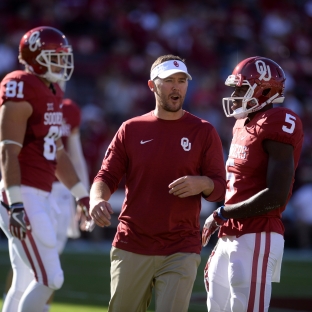 Oklahoma football: Sooners are on the lookout for their next great wide receiver to replace Dede Westbrook

NORMAN, Okla. — For the second straight year, Oklahoma must replace a star receiver.

And again, the seventh-ranked Sooners feel they have the talent on the roster to get it done.

Back in 2015, Sterling Shepard posted one of the best seasons in Oklahoma history. He often made big plays as a senior and wound up ranked second on the school’s all-time career lists in receptions and yards. When he joined the NFL’s New York Giants, no one was sure who would fill the void.

Dede Westbrook got off to a slow start last season, but eventually posted a more prolific season that Shepard’s senior campaign. He caught 80 passes for 1,524 yards and 17 touchdowns last season and won the Biletnikoff Award, which honors the nation’s best receiver.

Now that Westbrook is with the Jacksonville Jaguars, the questions are back. The Sooners have holes at other receiver spots, too — they lost projected starter Nick Basquine for the season to an Achilles injury during fall practice. While it’s not clear if any one player will be as productive as Westbrook, head coach Lincoln Riley remains confident in the talent on the roster.

“When guys sense an opportunity, their games tend to rise up a little bit,” he said. “I’ve seen nothing that would suggest that we’re going to have a problem there.”

Jeff Badet, a transfer from Kentucky, is the most likely candidate to fill Westbrook’s role. He caught 31 passes for 670 yards and four touchdowns last season for the Wildcats.

“I think Jeff adds a whole different element with the deep ball,” quarterback Baker Mayfield said. “He’s able to go up and get it. He’s a guy that’s able to track the ball really well, which is something you’re either born with or you’re not. It’s good to see we have a guy like that in our locker room.”

The best of training camp.

Junior college transfer Marquise Brown is a speedster, and Jeffery Mead and A.D. Miller are big outside targets who saw action last year.

Junior tight end Mark Andrews, already a two-time All-Big 12 selection, caught 31 passes for 489 yards and seven touchdowns last season. Even at 6-5 and 254 pounds, he often splits out and uses his speed to stretch the field.

“He’s always been a good red zone target,” coach Lincoln Riley said. “His ratio of touchdowns to catches in his career has got to be up there. So what would a good year be? I don’t know that you can define that, but we expect him to be very productive, a matchup we can really exploit.”

Riley is high on Mykel Jones as an inside receiver. He caught 13 passes for 106 yards last season and could ease the loss of Basquine. He said Miles Tease and Lee Morris have made the most of their increased practice repetitions.

Freshmen Cee-Dee Lamb and Charleston Rambo are freshmen who have made an impression.

“They are ahead of where most freshman receivers are. They still make some rookie mistakes but the thing you see is they are both very competitive and they are not hesitant,” Riley said. “They have shown the potential and playmaking ability that we thought they had when we recruited them.”