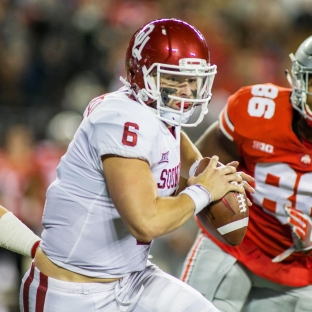 NORMAN, Okla. — Baker Mayfield is one of the most visible players in college football.

Oklahoma’s energetic quarterback has finished in the top four of the Heisman Trophy race the past two years. He garnered more attention last Saturday by planting the OU flag in the middle of the field at Ohio State after rallying the Sooners to a 31-16 win over the Buckeyes .

His supporting cast is relatively unknown. Last year’s stars — running backs Samaje Perine and Joe Mixon and Biletnikoff winner Dede Westbrook — are in the NFL. Now surrounded by a group of freshmen, transfers, walk-ons and players with expanded roles, Mayfield has been just as good, if not better, than last year. His six touchdown passes this season have gone to six different players.

Nine of second-ranked Oklahoma’s 12 touchdowns have been scored by players who never scored for the Sooners before this season, and three have come from freshmen.

RELATED: Sooners surge to No. 2 in Top 25 | Reactions | Poll by the numbers

The team’s receiving yardage leader is Jeff Badet, a graduate transfer from Kentucky. He has nine catches for 173 yards, and already has shown he can be trusted to make difficult catches. His leaping 51-yard grab against UTEP gave Mayfield more confidence in him.

“Knowing he can stop and make a play like that when you make a terrible throw like I did — it makes me feel I’m able to be bailed out,” Mayfield said.

Mark Andrews, the team’s most experienced receiver, is second with 157 yards and tied for the team lead with nine catches. The two-time All-Big 12 tight end went down with a left knee injury early against Ohio State, and the offense continued to produce. Coach Lincoln Riley said Monday that he expects Andrews to play against Tulane on Saturday.

Receiver Lee Morris, a sophomore walk-on, leads the team with two touchdown receptions — on two catches. His 18-yard scoring grab in the third quarter against Ohio State gave the Sooners the lead for good.

.@baker_mayfield6 says this team as close as he’s ever seen – and it started with the freshman.

The backs are in unfamiliar positions, too. Senior fullback Dimitri Flowers had career highs of seven catches and 98 yards against Ohio State. He has seen an expanded role after spending most of his career making others look good.

“He’s an unsung hero,” Mayfield said. “Along with the linemen, they don’t get a lot of credit, but it’s good to have him. He’s such a utility guy. He can be in the blocking schemes. We can slip him out because he can catch like a receiver and he runs well. It makes it very dangerous to have that kind of guy who can do that.”

RELATED: Back on top, can Oklahoma stay there?

The team’s leading rusher is Trey Sermon, a true freshman who has 136 yards from scrimmage. He had a 10-yard touchdown reception from Mayfield in the fourth quarter against Ohio State.

He didn’t play like a freshman – @treeflowers36 on @treyera‘s performance vs. Ohio State Saturday.

With so many young players in key roles, Riley will try to help them handle success as they head into Saturday’s game against Tulane.

“We’ve won two games, you know?” he said. “We’ve had success in two games. That’s great. We appreciate it. We’re happy about it. But there’s so much more to go. We’ve got some good leaders. We as a staff will do a good job of keeping it in perspective and know we’ve got a long way to go to get where we want to go.”